Photos: This Was New York City During The Massive 2003 Blackout On August 14, 2003, at about 4:10 p.m., New York City was suddenly powerless. All electricity disappeared when an overgrown tree branch hit a power line in Cleveland (and a utility company's alarm system failed). Eight northeast states, plus Ontario—in total more than 50 million people—were plunged into darkness.

While they had to endure about 30 hours without electricity, New Yorkers turned the blackout into a moment of urban solidarity: Citizens started to direct traffic since traffic lights were out; they helped each other out of trapped subway cars; welcomed in stranded colleagues who couldn't get home; restaurants held impromptu cookouts, sharing their food and beer with neighbors. 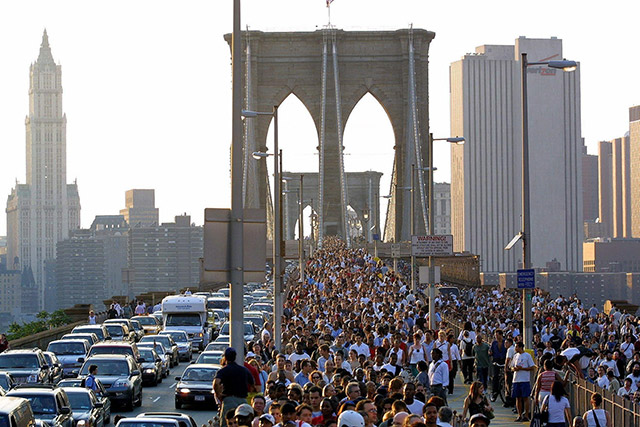 It wasn't all fun: 413 subway trains and 400,000 passengers were stopped and all needed to be evacuated. That process took almost three hours, and a federal report noted, "Unfortunately, the passengers flowing into the streets from underground met a massive amount of congestion in the streets and on the sidewalks due to the volume of vehicles and pedestrians."

Of course, the bigger issue was the infrastructure of our energy supply. Here's Bryan Walsh, former environment and energy reporter for Time, discussing what caused the blackout with Brian Lehrer a few years ago.

Here's a tick-tock of just two minutes of the blackout—why this hasn't become a Netflix movie or limited series, I don't know:

4:10:42 p.m.: An 820-megawatt generator in western Michigan shuts down. A second later, a line connecting Michigan to Ontario fails. Two seconds after that, a circuit breaker separates the grids in eastern and western Ontario, and a major transmission line connecting northern New Jersey and New York fails. The blackout will spread no farther south.

4:10:46 to 4:10:55 p.m.: Circuit breakers sever all lines between New York and New England, which is producing enough power to sustain itself. Blackouts spread in New York and in Ontario, which cuts off 2,500 megawatts, enough to light 2 million homes, trying to curb the cascade of failures.

4:10:50 p.m.: Breakers sever connections between New York and Ontario, except for a cluster of plants near Niagara Falls, for six seconds.

And no, there was not a blackout baby boom—one person told the AP, "Sex was the last thing on my mind. It was hot and muggy. We didn't have working showers. We went into survival mode, not sex mode."

Finally, the most disgusting fact the blackout left us with: 30 million gallons of untreated human waste were released into the East River. Happy anniversary!

#2003 blackout
#energy
#blackout
#infrastructure
Do you know the scoop? Comment below or Send us a Tip