Photos: This Is Why There Is No L Service To Manhattan As the MTA (impressively!) gets much of its system back online in the wake of Hurricane Sandy (hellllo, B train!) there has been some grumbling about the fact that they still haven't brought the L train back into Manhattan (let alone started up the G train!). The MTA has blamed the issue on a totally flooded L train tube, and now they've released photos to back themselves up. Maybe they should just turn lemons into lemonade and start running an L train gondola?

Since the storm filled up the tunnel last week, MTA employees have been hard at work draining it. The pics above were taken on Monday afternoon. According to the MTA: "After the tunnel is pumped dry of water, work will begin to inspect tracks, signals, switches, electrical components, and third rail. If any repairs are needed, employees will make them as quickly as possible to get service restored." As an official told us yesterday, "Getting the G and L running again is our highest priority, and crews are working around the clock on both."

Still, apparently not everyone has gotten the message that the silver bullet isn't running into or out of Manhattan yet. Our own Rebecca Fishbein found quite a few people waiting patiently for the L at 6th Avenue this morning, as you can seen below. We hope they brought a good book. 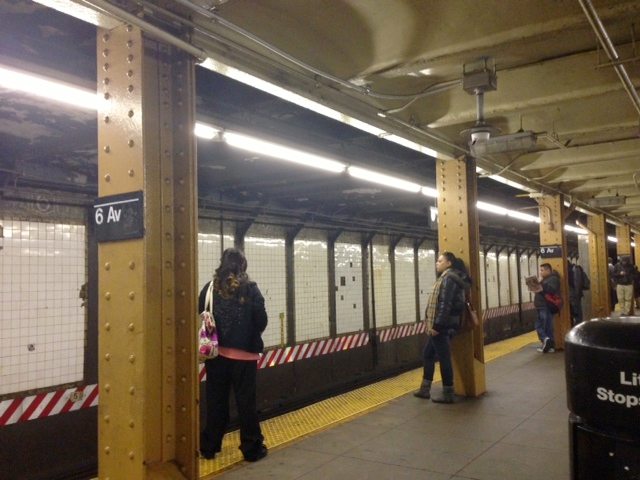 Waiting for an L train that will never come (Rebecca Fishbein / Gothamist).

#brooklyn
#frankenstorm
#hurricane sandy
#l train
#manhattan
#MTA
Do you know the scoop? Comment below or Send us a Tip