The NYC skyline is defined by its many glass-encased skyscrapers reaching toward the heavens. But generally speaking, these skyscrapers usually make some functional sense in the real world—it isn't like architects are taking inspiration from the insane Tim Burton designs in Batman Returns. But not so for architect Mark Foster Gage, who apparently took acid while watching the most recent season of Game Of Thrones and designed the building above, nicknamed "The Khaleesi." 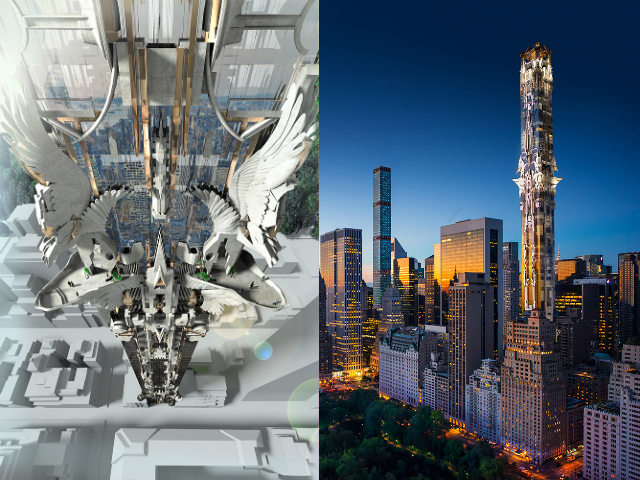 This impressive 102-story residential building proposal, which would be located at 41 West 57th Street right in the heart of Billionaire's Row, is like a melding of The Legend Of Zelda and Burning Man aesthetics. According to Gage's website, "each unit has its own unique figurally carved facade and balconies that frame particular features of the surrounding urban and natural landscapes."

The building is "draped in a facade of limestone-tinted Taktl concrete panels with hydroformed sheet-bronze details and brass-tinted alloy structural extrusion enclosures," and those are definitely real words! 6sqft, who first noticed the plans, described the "whimsical design" as being adorned with "ornaments ranging from gears and propellers to an abstracted pair of birds diving in for a landing on two wing-supported balconies. The tower is topped by a temple-like observational platform which is then crowned by a golden wreath-like structure fit for any victorious Roman general."

Even though we don't hold out much hope, the building's status is listed as "ongoing" on the site. For what it's worth, Gage is a real tenured professor and Assistant Dean at the Yale School of Architecture. He's also written at length about his architectural philosophy in an essay called, "Killing Simplicity: Object-Oriented Philosophy in Architecture." [PDF]

In other words, it seems pretty clear at this point that Mark Foster Gage is actually a pseudonym for David Xanatos, the ruthless genius who built a skyscraper "above the clouds" in the hopes of achieving immortality. Which I guess makes the Department Of Buildings his Gargoyles.

#architects on acid
#building
#manhattan
#Mark Foster Gage
#midtown
#skyscraper
#the khaleesi
Do you know the scoop? Comment below or Send us a Tip