What was your day like today, were you able to strike? Yes. I'm a senior undergraduate at Columbia University, and I organized both in International Socialist Organization and a group on campus called Columbia Against Trump. We helped to build a walkout on campus—many classes were cancelled, and a few hundred people showed up for our rally.

How do you feel about the rally being a strike from the workplace and other expectations put upon women every day? Within the women's movement internationally, strike has always had this broader meaning of rejecting all forms of labor that are put on women. That context is important because it shows the necessary and unavoidable contribution that women make in society. At the same time, women's oppression continues to exist and has been heightened in the absence of a radical, assertive feminist movement. Instead, you've seen this Lean-In bourgeois feminism that I think has really led to the hamstringing of progress and allowed things like Planned Parenthood to be cut, decade after decade.

Did you encounter much opposition from Columbia faculty and administration?
It was really disappointing. Certain departments that have a kind of left reputation on campus, like the Anthropology department, really failed to come through. The graduate students wrote letters collectively saying "We're supposed to be a feminist department, how come we're not canceling to support the strike?" 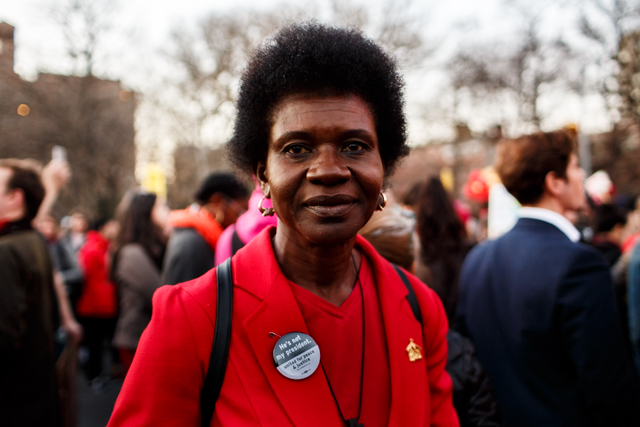 How do you feel about today's strike? I think it's a wonderful thing. I've never experienced something quite like this. This is the day to do it—if not today, when? We need to demonstrate that we are something and we know our importance.

Is it important to disrupt daily life as a call for justice? If not now, when are we going to do it? Not on a Saturday, not on a Sunday—a workday is the day to do it, to have an impact. We used to say "Oh, take your daughter to work," but that's not enough. We have to do this. That's how you have an impact. 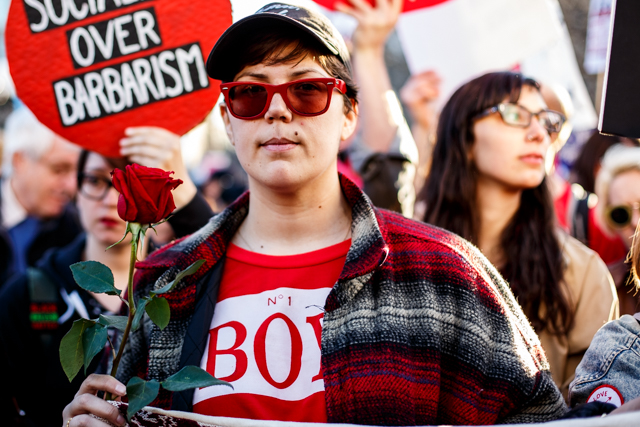 You're here surrounded by Democratic Socialists. How do you feel about escalating tactics and moving from a march to a labor strike? It definitely sends a strong message—stronger than turning up on Saturday. Taking time off from work and moving your physical body into a place to gather together, it sends a pretty strong message. If businesses are actually being shut down or someone in their office says "Oh, I can't run my company, maybe I should provide more maternity leave and think more about how I treat people in my office." The disruptive element is an important political force. If you don't say something or try to make change, it can't happen.

Have you been active in the DSA for long? I joined right after the election in the midst of a lot of misery. Since then it's been exciting to meet people with similar ideas who want to stay active. It feels great to contribute and know we're not alone in how we're thinking and feeling.

Are you striking from work today? Yes, I took the day off. I do graphic design in an office.

What was the conversation like with your bosses and coworkers? I took a sick day, but I had a meeting with all the ladies at work. We have a call center, so it's hard for everyone to take the day off, but we talked about other ways to get involved.

A lot of the men in the office complained, like "Hey, what about us?"

What do you think about that? I appreciate solidarity, but I don't accept anyone shaming us for standing up for our rights. Clearly we're not getting special treatment. 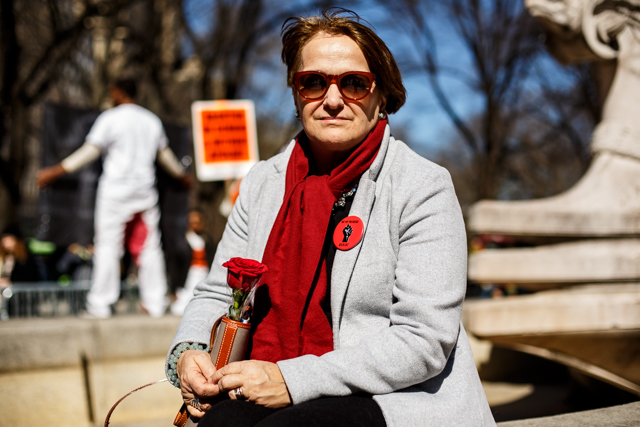 Are you striking from work today? Actually, I'm not. I'm a professor and I'm on vacation. This is my spring break. I just happened to be off, but otherwise I would have not worked.

Donald Trump is responsible for bringing women together. He's the cause of all of this. To have someone to focus our frustration on is powerful. He's emblematic of so many problems. For everyone who cares women and women's issues, this is our worst nightmare coming true.

There seems to be quite a bit of cross-pollination with speakers discussing women's rights and workers rights. Would you like to see more of that intersectional solidarity? Well, women tend to work the jobs that have the least power, the least benefits, the least pay, and the most exploitation. Unfortunately so many women can't take off today, because they're wage-earners, and that's a day's wages to feed their families. We're here for the women who have to work today to feed their families, because of the economic inequalities we face. Workers and women, I think we have so much more in common than what the Trumps of the world claim. They try and make us marginalize each other. A woman making $7.50 an hour shares a lot with a man making $7.50 an hour. It's really about all of us. 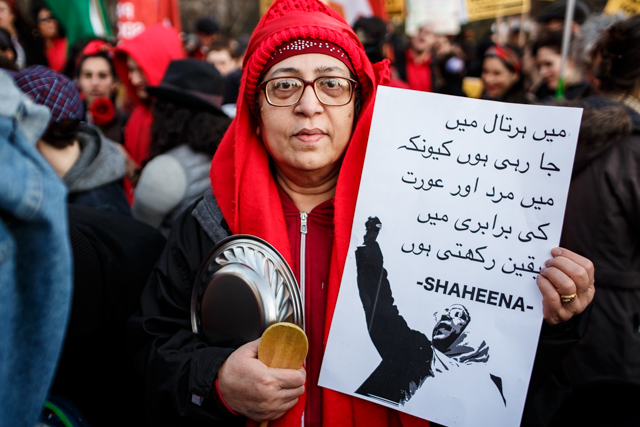 What's important about striking as a show of protest and solidarity? It is a very powerful feeling, to leave work at home and come here and be in solidarity with all the other women here. There is power just in us being together here.

What would you have done today if you hadn't come to the rally? If I wasn't here, I would have been home but my heart would still be here. We're connected with each other. Today I chose to leave my home, to not cook, but if for some reason I had had to stay at home my soul would still be here. And I wouldn't have cooked! 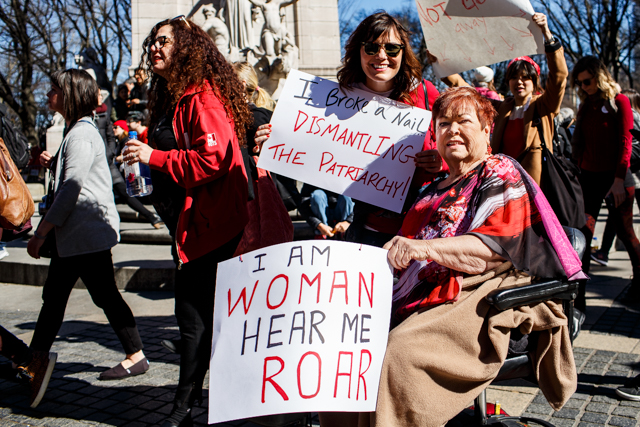 Patsy, how're you feeling about the day?
Good! I'm here visiting from Texas. My daughter works here, and she took off work. I'm retired—I used to run a restaurant. I think the strike is a great idea. Back when we were trying to get the ERA passed in California, we went to a march. And here we are now, she's almost 40, and I'm almost 75, and we're still marching. Which tells you we still don't have equality. Not in pay, and not in how we're treated. We've elected a president and look how he talks about women! Just because he's good to his daughter, I'm happy for that, don't get me wrong, I know he loves his daughter, but what about all the other daughters out there? All these women that he derides, where's the respect? I feel deeply about it, and my daughter does too.

Stacy, was women's rights, in and out of the workplace, something you and your mother discussed often growing up? Always. My aunt, her sister, is also a huge feminist. They took me to an an ERA rally back in the 80s. I grew up in a house with a strong woman who treated my brothers and I the same, and told them it was okay to be sad and emotional, while telling me it was okay to be powerful and brave. It was how we grew up.

Are you striking from work? I am. It was nerve-wracking. I talked with my bosses on Monday. I'm a leader in my company, and I brought up that this was happening and I planned to strike. I said we needed to have a conversation about it, not just ignore that it was happening. We released a statement to all the people on our team that they could choose to participate. The office would be open, but if they choose to participate they would not be punished. I put up an out of office email saying I was striking today—I hope we can start a conversation, even if it pisses people off! I hope that they stop and think about the women's movement today.

Patsy, there's a real political difference between Texas and New York City. What would you say to women who are hoping to strike or show distaste for Trump's policies who aren't in a liberal area? Yeah...I don't know how much they'll be striking in Dallas. Let's face it, Texas is a big, strong Republican state. It's hard to be a Democrat in Texas. I'm not trying to knock the people, though, because I love Texas.

And Stacy, it must be hard to be in New York City and see such commitment to progressive causes, and then look at Texas where your mom is, and know there's less enthusiasm. My mother's been calling me nonstop since the election, talking about how it's really hard to be in Texas. She says "I feel like I'm in the minority" and I keep telling her "You're not!" More people voted for Hillary. Just keep that in the back of your head.

When she planned to visit, I said I really hoped there'd be a protest that she could be a part of, so that she could see this for herself. When all this came about, I said "We have to get involved!" We're spending the day surrounding ourselves with amazing women and amazing allies. 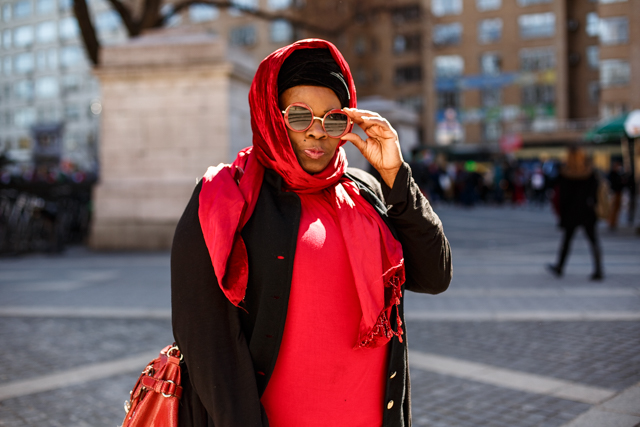 How do you feel about striking? I have to! I have to! It brings awareness to women and what's going on all around the globe. I'm happy to be here. I'm not buying anything. I've got snacks and water and I'm alert and I'm here to support my brothers and sisters. 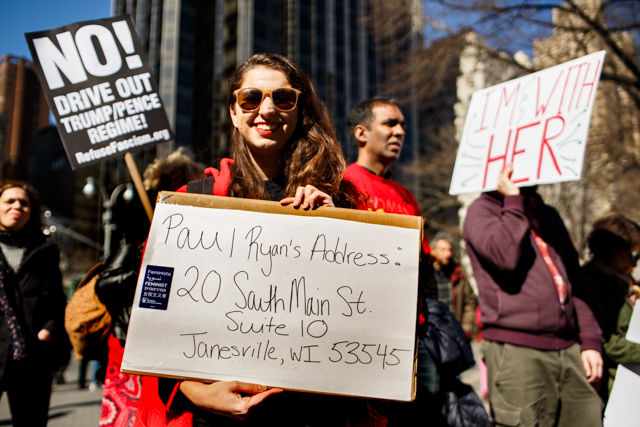 How do you feel about using a strike as political action? Well, as far as striking from work, it's a good way to show the impact of women at work. People take for granted how many women are in their workplace, personally. I was lucky enough that our CEO is very supportive all the women leaving work.

How did that process go, getting ready to strike? I told my boss a couple weeks ago, when it was first announced. I used a personal day, and that's a privilege that a lot of people don't have. I feel and understand that, and that's why I'm obligated to come out and do what I can. To march and speak out. 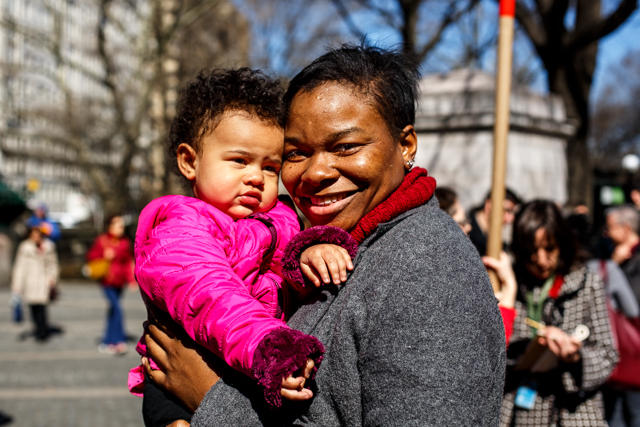 Was it hard to get off work today I'm actually at work today, but I wore red in solidarity. I just ran out of my office—don't tell my boss! We just need to remember that it's international women's day all around the world. It's a celebration of us and all we do. 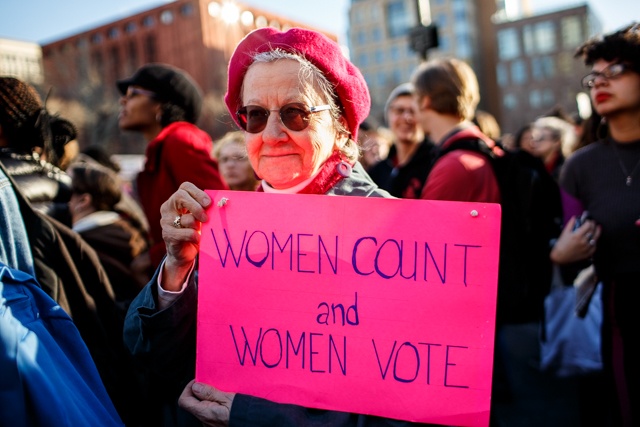 What do you think of the strike? My sign speaks for itself.

#portraits
#strike
#women's march
#women's strike
#original
Do you know the scoop? Comment below or Send us a Tip