Photos: Staten Island Schoolbus Tips Over After Crash With Truck

A handful of special needs children had an eventful commute to school this morning in Staten Island after their bus careened over onto its side during a crash at the intersection of Oakdale Street and Preston Avenue. The driver was injured, and one little girl had a bruise on her face, but officials say none of the injuries were serious. All of the children were taken to the hospital for observation, as a precaution.

The bus was tipped over in a collision with the driver of a black pickup truck who was taking his teenage son to school. The driver also sustained minor injuries. "They all seemed OK except for one little girl who was crying," a witness tells SI Live. "She had a bruise on her face." 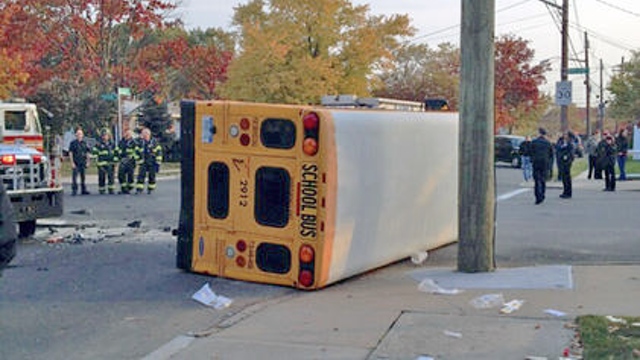 Some local residents have been calling upon the DOT to make changes to help reduce speeding on Oakdale Street. "This was inevitable, something like this. It's amazing to me that you plead and plead with city officials to do something simple like putting in a stop sign," Dr. Stephen Borchman, who has an office at Oakdale and Preston, told the Advance. "It takes a tragedy like this for hopefully now that they'll listen, that we haven't been blowing smoke all these years."

No charges have been filed, and the exact cause of the crash remains under investigation.

#school bus
#schoolkids
#staten island
Do you know the scoop? Comment below or Send us a Tip