Photos: Sharp Anti-Homeless Spikes Have Been Installed Near Pope's Route

If you walk on 32nd Street near Madison Square Garden, where Pope Francis will be speaking later today, you'll find some new accoutrements have been added to the side of the Manhattan Mall, which houses stores like JC Penney. Are they birdbaths filled with Holy Water? Perches for doves? Whisper machines that let you know that everything is going to be okay? Not even close. They are sharp metal spikes meant to drive away impoverished human beings.

A tipster sent in these photos, noting that "these metal structures are new. Homeless people previously used these alcoves to sleep in. Not a coincidence that they were placed this week." As you can see, they've been specially designed to fit in these exact nooks.

In addition, 32nd Street between Broadway and 7th Avenue was previously lined with benches, a pedestrian plaza area where some of the homeless population would congregate. The benches are now gone. 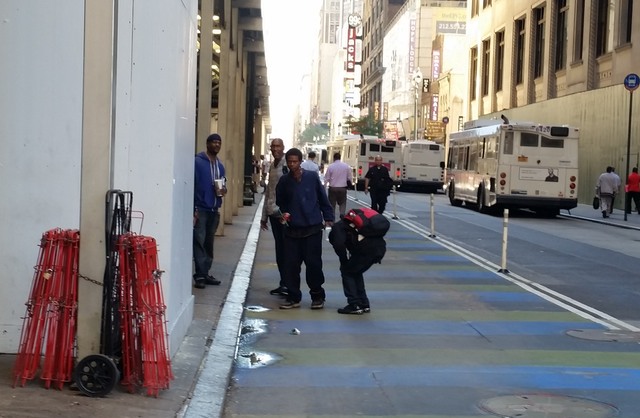 We reached out to the city and the Department of Transportation, and a DOT spokesperson told us that "18 benches in the area were removed by Vornado early due to security preparations for the Papal visit." But "those spikes appear to be privately placed." It turns out that Vornado Trust Realty also leases out the Manhattan Mall, and are the likely culprits here, too.

Vornado is the dominant property owner in the area surrounding Penn Station. Earlier this month the NY Post reported that "the seating pods," which they refer to as "homeless magnets," would not be returned following the Pope's departure. "The plaza will be redesigned” next month.

We reached out to Vornado about the spikes, and will update when we hear back.

#holy spikes
#manhattan mall
#pope francis
#pope in nyc
#vornado
#original
Do you know the scoop? Comment below or Send us a Tip