A group of about 100 semi-nude protesters gathered at Union Square on Saturday to voice their opposition to Donald Trump's proposed future policies and long track record of racism and misogyny. Before the protesters marched to Trump Tower, makeup artists painted fake wounds and scars on them to represent the harm that many marginalized groups will face under a Trump administration.

Protesters marched up Broadway towards Trump Tower along the sidewalk, escorted by an NYPD officer, chanting "My body my choice," and "Not my president." By the time the group reached a pre-designated protest site at 56th Street and Fifth Avenue, the protest had dwindled to three or four dozen people, but they attracted a large crowd of onlookers who stopped to watch the protest unfold.

From the protest pen, the activists chanted "Don't just watch us, join us" at the many tourists and passersby who were near Trump Tower. Many took photos and expressed their support, but a few Trump supporters heckled the protesters from across the street. The protesters responded by chanting "Bigots go home" at the small group of hecklers, who they presumed to be tourists.

"It's scary to see people against protesters and see the hatred for this," 20-year-old protester Mesa Melton said. "But it's even scarier to think about where they got these ideas and who's telling them to think that way."

"We need to use our voice and our rights to speak out against this," she said. "It gets scarier every day. The more people he floats for appointments and the closer we get to inauguration day, the scarier it gets. I'm terrified for other people who have more at stake than I do and whose rights can be taken away at any moment. We're taking a huge step backwards."

Across Fifth Avenue, a New York resident and his two small children had their own pro-Trump counter protest. Calvin Hunt, a 55-year-old Harlem resident, stood on the west side of Fifth Avenue between 56th and 57th Streets with a sign that read "Trump is our president." His son stood next to him, holding a sign that said "Hillary for PRISON 2016" and wearing a Make America Great Again hat.

Hunt, who is black, said Trump was the only candidate who was really invested in the black community. "He goes into the communities where there's despair," he said. "The black community looks like a third world country, and the Democrats don't do anything about it.

As he spoke, passersby, none of whom were black, thanked him; "Amen, brother," one yelled. Hunt was later joined by a 73-year-old man, Marvin Knight, whose sign had a very different message: "Arrest treasonous Trump." 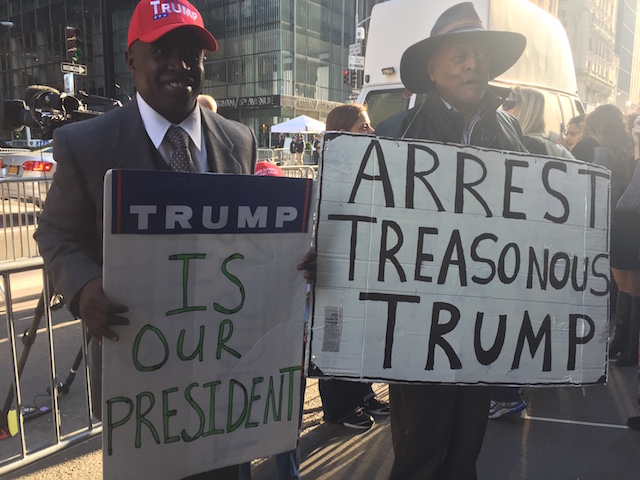 "Obama supposedly couldn't do it because they said his hands were tied," Hunt said, "but Trump's hands won't be tied—Republicans will control all three branches of the government!"

"I've been out here protesting every day," he added. "But it's not a protest—I'm a supporter of Trump. For those that still don't believe it, he'll be the 45th president soon, whether they like it or not."

But the anti-Trump protesters across the street clarified that they knew they couldn't stop Trump from becoming president.

"These protests are a way for us to show solidarity with one another," Megan Mahony said. "Despite the administration that's coming in, we aren't going to let hate and fear take over our country." Mahony, who is 25, said she voted for Hillary Clinton and didn't expect Trump to win. "There was a small part of me that thought it was possible, but I was surprised," she said of his victory.

"I didn't know there were so many people in the country who felt so negatively affected by the past 7 years that they thought Trump was the solution."

#donald trump
#Trump Tower
Do you know the scoop? Comment below or Send us a Tip
A new Gothamist is coming! We’ve moved comments over to our beta site. Click here to join the conversation and get a preview of our new website.