Photos: Riding To D.C. On A Bus Full Of Trump Protesters Gloria Mendoza and Jovan Rodriguez, both 26, sat on the shallow stone steps in Union Square Park around 12:45 a.m. on Friday, the day of Donald Trump's inauguration. Nearby, someone played "Sandstorm," the ear worm EDM track, on a recorder. A coach bus idled across the street, in front of Whole Foods, waiting to drive about 50 protesters down to Virginia, to catch the Metro into Washington, D.C.

"We're both Mexican and I think even though our families were like, 'Maybe you shouldn't go do that,' I know it also means a lot to them that they are going to be in some way represented," said Mendoza, who lives in Bushwick and works at Roberta's Pizza with Rodriguez. Both are undocumented and recipients of Deferred Action for Childhood Arrivals, which ensures their protection from deportation. Their status could be threatened under President Trump.

ANSWER Coalition—that's Act Now to Stop War and End Racism—sent seven buses down to Washington early Friday morning, carrying more than 380 people from pick-up points in Jackson Heights and East Harlem, as well as Union Square. The buses aimed to get protesters to a Secret Service parade route checkpoint on 7th Street Northwest by 6:00 a.m., when the gates were scheduled to open. ANSWER had secured the largest permitted protest site along the parade route, at the Navy Memorial on Pennsylvania Avenue.

"I think, this is where we need to be right now," said Michael Kowalchuk, 25, an architect. "Because Trump wants a sanitized coronation for his presidency, and I don't think the left, or people of conscience, should give him that opportunity."

ANSWER had planned to protest regardless of which major candidate won. Their message is anti-fascist, and skeptical of an established political system that they argue has long fueled war and racism. But Ben Becker, a longtime organizer with the group, acknowledged that Trump is "not comparable to other politicians," and that actions against him draw "far larger crowds." 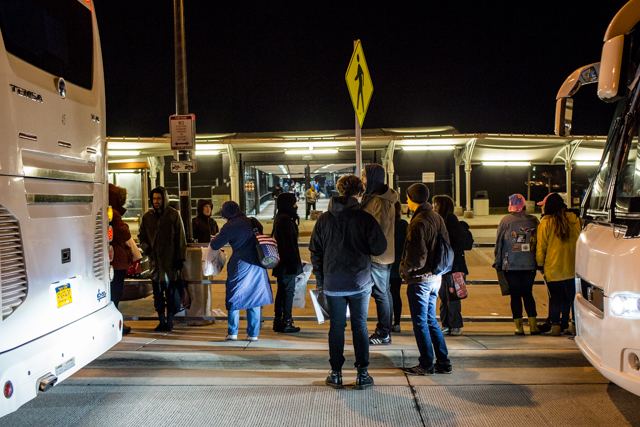 The four-and-a-half hour bus trip was quiet, with people sleeping and making occasional, bleary-eyed trips to the on-board bathroom. Past the Holland Tunnel, roads were surprisingly clear. At the Vienna Metro station in Oakton, Virginia, around 5:00 a.m., the group huddled outside, blowing on hands and rummaging in the dark for coats and hats. Mike Harrison, 30, from Queens, grimaced at the prospect of answering a reporter's questions about how he was feeling. "I want to get this done with," he said. Then, after a pause, "I'm sorry, this really is something I believe in."

Protesters set down their signs on the Metro, some to peel open granola bars and bite into homemade sandwiches. Riders got on at each station, several of them wearing Trump stickers and American Flag beanies, carrying large coffees from Starbucks and Dunkin Donuts. Factions murmured, gravitating to opposite corners.

"My plan is Red Bull," said Sam Berrios, a college student from Manhattan, observing the crowd. "Also to be surrounded by [these] people might scare me into being awake. Not necessarily, but keep me alert."

Downtown, the group waited over an hour to travel a block towards the checkpoint at 7th Street. The sky grew light, spitting rain. Hawkers sold Trump hats and buttons. At one point a man in a Trump hat shook his head at a woman wearing a "Not My President" sash. "Disrespectful," he said. "Criminals."

By mid-morning, when the Anti-Capitalist, Anti-Fascist Bloc was breaking windows at a Starbucks, Au Bon Pain, and a hotel nearby, the shoulder-to-shoulder queue outside of the parade checkpoint was thousands deep. Occasionally security rolled tall mesh gates in front of the checkpoint, stopping all movement.

"I witnessed them holding the line and allowing Trump supporters to form their own line," said Shaniqua Pippen, 31. In total, organizers estimated that about 15,000 people at least attempted to reach the protest site.

"No checkpoints were ever closed permanently," said a Secret Service spokeswoman on Sunday. "Throughout the day they were adjusted either for pedestrian flow, or public safety. I can just say that the Secret Service is an apolitical agency and we processed everyone through the same way." 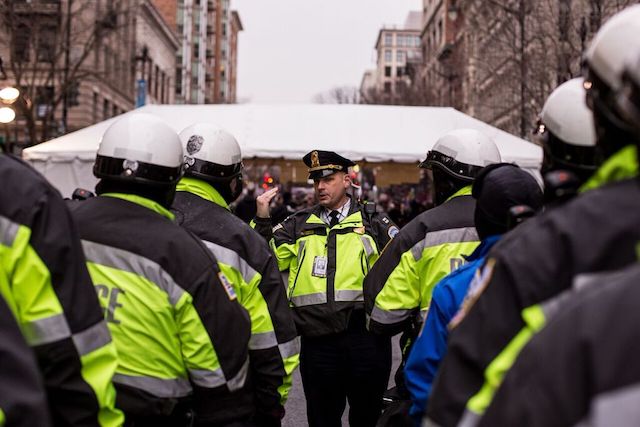 Past the checkpoint, sidewalks along the parade route were nearly empty in the final hours leading up to Trump's inauguration. Hundreds of protesters at the Navy Memorial between 7th and 9th Streets made up the largest crowd in sight, queuing around a large stage. Small groups of Trump supporters milled nearby.

"I believe in the rights we are granted as Americans, and free speech and right to protest is definitely one of them," said Niels Jorgensen, a retired FDNY Lieutenant who voted for Trump, standing a few blocks from the Navy Memorial. "I just feel like you shouldn't be destructive, and you shouldn't make anyone's day less enjoyable because you have something to pitch."

Activists took the stage to speak against police brutality, and the threat of the Dakota Access Pipeline. Becker, the ANSWER organizer, was bitter about the media attention given to the black bloc. "Thousands made it to DC to express themselves on the inaugural parade route," he said. "Instead a few broken windows get the wall-to-wall coverage."

When the inauguration ceremony began, large speakers set up along Pennsylvania Avenue blasted the audio feed from the National Mall, a few blocks away. By the time Mike Pence took his vice-presidential oath, hundreds of protesters were shouting "Dump Trump! Dump Trump!" Many kneeled or sat on the ground, holding fists and middle fingers in the air. A few women with double middle fingers had tears in their eyes.

The National Anthem was barely audible in front of the Navy Memorial stage, where a DJ played Dead Prez's "Malcolm, Garvey, Huey." People shouted the chorus: I live, I die, I organize / Everything I do's revolutionize.

Earlier in the day, on the Metro, Berrios said that she was already excited to get back home, to start organizing in her neighborhood. She criticized some of the popular slogans that have sprung up since the November election, broadly promoting unity and love.

"I'm not really for the entire movement of like, 'Love Trumps hate.' You know?" she said. "I think a [raised] fist does. I mean it's very liberal and nice to say that it's not about Trump, that it's more just to show solidarity with other people. But in reality I don't think it's doing enough to show up for one day and show a lot of love. We need more than that."

#Answer Coalition
#donald trump
#inauguration
#Overnight Bus
#protest
Do you know the scoop? Comment below or Send us a Tip