Photos: Poison Ivy From NYC Park Taking Over Public Sidewalk In The Bronx

Poison Ivy may be native to New York, but it's still not a plant you want to, or expect to brush into on your way to the subway. Recently, we reported that an unwieldy bunch of the stuff was growing through a fence and into a public sidewalk in Queens, with its roots planted firmly in a plot of land owned by the MTA. Our report then prompted the agency to remove the public health hazard (the city notes it's illegal to let poison ivy grow on property in NYC, after all). This week, photographer David "Dee" Delgado spotted a similar scene in the Bronx, in another area with a fair amount of foot traffic, near the Sheridan Expressway and Bronx River.

Delgado told Gothamist, "A decent amount of foot traffic goes along that gate where the poison ivy is at because of the subway, and the layout of the street makes it difficult to get to the other side." He noted that in the few minutes he was there getting photos of the poison ivy, he warned at least six people to stay away from it, while others were already walking in the bike lane to avoid it.

Similar to the MTA's patch in Long Island City, this one has also become wildly overgrown and begun to take over the public sidewalk.

We reached out to the Parks Department, and spokesperson Anessa Hodgson confirmed this was coming from their property: "Our horticulture team investigated and confirmed this is poison ivy growing at Concrete Plant Park. We will address it this week." 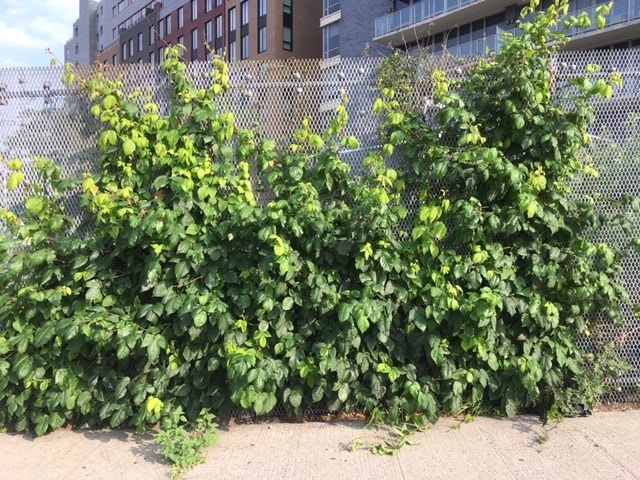 The MTA's wall of poison ivy in Long Island City, which also grew out on to the public sidewalk. (Rachel McKeon)

Here's our guide on how to identify poison ivy (just remember: "Leaves of three, Let it Be"), which is more present in NYC than it used to be. There's been a spike of it in recent years, Ronnit Bendavid-Val, Horticulture Director at the Brooklyn Botanic Garden, told us last week. “I’ve seen it all over the city, crawling up lampposts, on fences... The past three years, with the mild winters and long wet springs, [we've] seen a huge growth of poison ivy and other weeds that spread through their roots."

Now, just because this plant can cause you to blister and suffer miserably, doesn't mean it's pure evil (or IS it?). Some here even love it, and would prefer we didn't rip it out of the ground. "I actually like poison ivy, because it's a native species in our area, one of the only native vines we have," Kristy King, NYC Parks Director of Natural Areas Restoration and Preservation told us last week. "So sometimes we'll get calls from borough operations to remove it, but I'm always kind of pushing back on that to be honest because it's a nice native species, although I do understand the public health hazard." (Note: King was referring to off-the-beaten-path poison ivy, in less accessible areas than we're talking about here.)

Dr. Robert Naczi, the Arthur J. Cronquist Curator of North American Botany at The New York Botanical Garden, told Gothamist, as far as poison ivy posing a threat to the public it depends on how likely it would be for people to make direct contact with the plants. "To keep the question of potential danger in perspective," he said, "please realize poison ivy is common [and] scenes like this are relatively frequent, even in urban areas." He added that "direct contact with a poison ivy plant is necessary for a person to be in danger (exceptions include direct contact with a pet that has directly contacted poison ivy)." So, by those common-sense standards, scenarios like the one we see here are in fact putting the public in harm's way, given the plant's placement.

Keeping that in mind, if you spot this stuff on public property in NYC, call 311 and send us photos and details. If you spot in the wild where it's likely to be left untouched, don't worry about it.