Another day, another huge rally for Bernie Sanders in New York City.

Yesterday afternoon some 4,000 Sanders supporters marched from Foley Square to Union Square, throwing boisterous Get-Out-The-Vote parties at either end. There was also a lot of Bernie fashion: 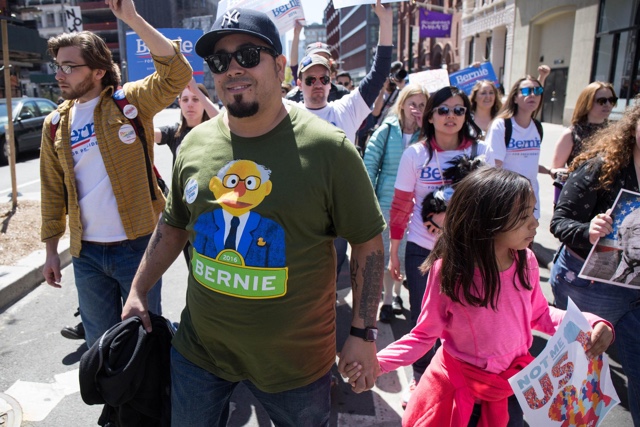 The event was organized by Millennials For Bernie Sanders, and included appearances by Shailene Woodley ("a kind of living symbol of the millennial force field" according to the Times) and Rosario Dawson.

#ShaileneWoodley at #BernieSanders March in NY!

Although the NYPD followed the marchers closely up Centre Street and then Lafayette, the mood on both sides was highly non-confrontational. The Democratic candidate himself did not participate in the day's activities, though Sanders did show up in the evening at The Hole gallery on Bowery to take in The Art of Political Revolution exhibition, much to the delight of everyone there. Aymann Ismail managed to capture the moment:

#BernieSanders came to look at paintings with his face on it. #TheArtOfAPoliticalRevolution

Bernie will be in Prospect Park today with another concert (RSVP), and, like his Washington Square Park rally last Wednesday, the crowd is expected to be large and the security lines are expected to be long.