Three days after white flags mysteriously appeared atop the Brooklyn Bridge's towers, the NYPD's Intelligence Bureau decided to head up there to check things out. NYPD Deputy Commissioner of Intelligence John Miller explained to the Post, "This is a chance to get the squad that’s actually doing the investigation a first hand look... We want to look at the process for taking the flag up and down."

There were NYPD boats in the water with a helicopter hovering above during the climb (not to mention numerous NYPD vehicles on the bridge or at the entrances). However, Miller admitted to WCBS 2, "We learned what we went up there to learn, but we didn’t find anything additional in terms of physical evidence." (And, yes, Miller, who was at CBS News before re-joining the NYPD, did give the exclusive TV interview about this to WCBS 2.)

Here's a look at some NYPD cops climbing up the bridge's cable on Tuesday to capture a flag—note how they walk through a gate at the beginning (the white flag team apparently got around the locked gate):

Police are still investigating who might have placed the 20 foot by 11 foot white flags after 3:30 a.m. on Tuesday. One hypothesis is that someone with knowledge of the bridge and the tower was part of the group. DNA was apparently found at the scene, and, per WCBS 2, cops are talking to construction workers at the bridge about their political views and "gripes" with the government. 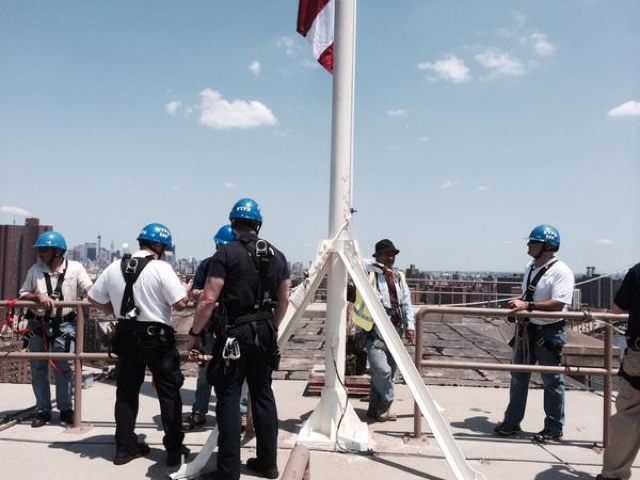 Miller told the Post that the exercise was very useful. "We needed to know a little bit more about what happened once they got up there ... How long would it take in terms of time and target [and] the process of taking the flag that size up and down. I would say it’s like the experience we’ve had with these cases which is, you know, names come up names go down and you keep going through until something clicks together."