About 10,000 people marched to Foley Square yesterday to protest President Trump's executive order barring immigration from seven majority-Muslim countries and Syrian refugees. The march kicked off with a rally in Battery Park, featuring speakers like Senators Chuck Schumer, Cory Booker and Kirsten Gillibrand (the latter of whom was cheered for voting against all of Trump's cabinet appointees), Mayor Bill de Blasio, Public Advocate Letitia James, and Comptroller Scott Stringer. Marchers then took to the streets, winding through Lower Manhattan and up Trinity Place to the New York State Supreme Court Building.

Reactions to the speakers were mixed—Schumer was criticized by some in the crowd for voting to confirm Trump's appointees, with critics yelling, "WHAT ABOUT THE NOMINEES?" and "VOTE DOWN THE NOMINEES!" And although Mayor de Blasio criticized Trump's executive order, his delivery was more along the lines of disappointed dad than outraged opponent. Still, he celebrated New York's diversity, and called attention to the 900 Muslim officers in the NYPD. "The president's executive order is fundamentally un-American, it's as simple as that," he said.

Tish James, who spoke after de Blasio, was more assertive, revving the crowd up as she called for young Americans in particular to fight Trump and pleaded with elected Democrats to grow spines. "Democrats in Congress, this is not the time to be weak-kneed," she said. "Remember that you represent the people. Rise up and resist."

Following the speeches, marchers headed along Greenwich street up to Foley Square. Unlike last week's Women's March, which had been planned well in advance, the vibe was more spontaneous and, in a way, more inclusive. Protestors held up signs advertising their own immigrant roots, demanding that Trump's administration recognize that America is a country built by refugees. Protesters screamed, "No ban/No wall," "Build a wall/We'll tear it down," and "No ban, no registry/Fuck white supremacy" as they paraded by Trinity Church and the 9/11 Museum. Along the route, bystanders held up flags from their countries of origin and cheered along with the marchers. In Foley Square, marchers continued to chant, though organizers pressed them to disperse for home or head to JFK Airport. 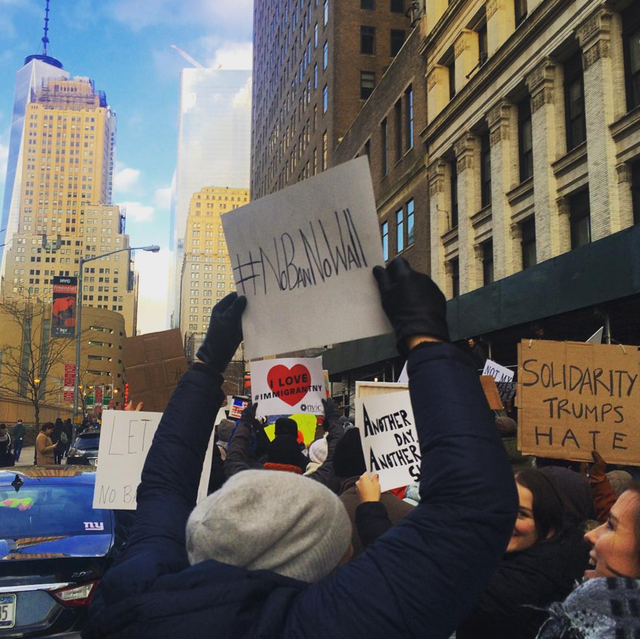 Still, as the throngs of thousands marched out of Battery Park, three 20-something counterprotesters stood to the side. One wore a "Make America Great Again" and held a sign that read, "Hate U.S. Cuz They Ain't U.S," an apparent reference to the Seth Rogen James Franco vehicle The Interview.

Michael Napoli, 22, held a "Turning Point USA" sign. Napoli explained that he and his friends had showed up to show an alternative to the message of the protestors. He said he sympathized with people who have argued that a ban on Muslims entering the country is contrary to Christian teachings such as "Love thy neighbor," but that he didn't quite see things that way.

"I love my neighbors here in New York City," he said. "For me personally, the way I understand 'Love thy neighbor' is that we should protect ourselves from radical Islamic terrorism."

DeRay McKesson, a prominent member of the Black Lives Matter movement, was at the march yesterday. He told Gothamist the protests will continue, just as the Black Lives Matter protests have continued for the last two years. "It's important to remember that Trump does not have a mandate and that the protests are a sign that people all across the country are coming together to resist his administration and his policies," he said. "I think everybody understands what's at stake right now and people understand that this implicates them. I think that we're seeing an awakening of sorts."

McKesson also spoke to the importance of organizing at the local, state and national level, and of pressing Congress to push back on Trump's agenda. "I think Congress will need to step up and take action to stop the destructive actions of the administration. And I think that we'll see people all across the country put pressure on elected officials to do their part," he said. "More importantly, we'll see people demand different policies at the local and state level that can mitigate the damage done by his administration."

#donald trump
#muslim ban
#no ban no wall
#president trump
#protest
#original
Do you know the scoop? Comment below or Send us a Tip