Today is Guy Fawkes Day, and to mark the historic occasion some eighty Guy-Fawkes-masked Anonymous hackivists/activists are marching amoeba-like through Manhattan, evangelizing about freedom of speech, digital privacy, and Not Being A Sheep. Before you rush out to join them, keep in mind that the Guy Fawkes mask you're about to buy puts pennies into the pockets of Time Warner, which owns the licensing rights to the iconic mask. In a perfect ironic twist, Anonymous itself acknowledges that Time Warner lobbies heavily "in favor of internet censorship."

If you did happen to pass by this wandering collective shouting about the oppressive regime of some totalitarian government (ours), you may have wondered exactly what their deal is.

Members of the hacktivist/activist collective Anonymous and other affiliated protesters are gathered for the first ever Million Mask March. Spawned earlier this year, the idea for a march encompassing Anonymous, Occupy Wall Street affiliates, and other activist groups was made manifest by John Fairhurst, the organizer of the initial Washington, DC Million Mask March (also happening today). Fairhurst, who is obviously not lower-case "a" anonymous, is an impassioned Anonymous member who has forsaken the mark of his clan to bring The Good Word to us.

One Anonymous-affiliated website reads, "He immediately starting investing all of his time and his own funds into spreading the word about it. Enthusiasm about this event seems to be contagious, and many others have also donated their own time and money to promote the event."

While the Washington, DC event was the first planned, the Million Mask March movement has been appropriated by at least 430 other locations, including most major cities in America, Hong Kong, Kabul, and even Fossil Bluff, Antarctica (13 members as of Nov. 4 on their Facebook page). 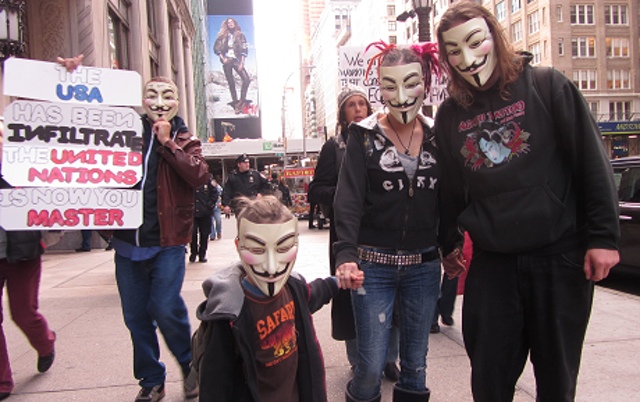 Today in New York, at least 80 Anonymous members and affiliates came together to protest a variety of issues with prototypical Occupy Wall Street nebulousness. Ex-military veterans generally marched in protest of US involvement abroad. Others made signs bemoaning evils like press censorship, the NRA, and the NWO ("New World Order"). But many, like Zachery Derenoncourt of Queens, are keeping the message simple and universal: "I would like for all people to have common access to the things they need. I recognize the world as common heritage for all human beings," he said. When asked if he would be voting in today's election, he responded, "There's voting today? For what? Shit, are the booths still open?"

At one point, the march paused for four people whom participants believed to be homeless. Several people gave them money, and they were encouraged to join the wandering collective. I didn't witness it myself, but two participants told me they saw one Anonymous member in a suit give a homeless man a $100 bill. 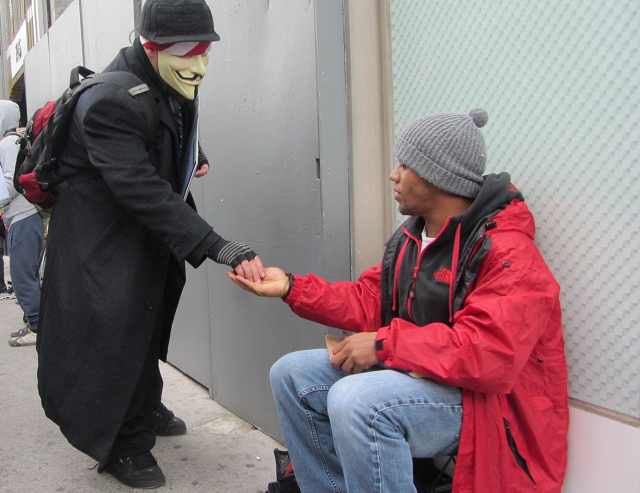 The ironically-titled "Official Facebook Page" of the very deliberately anarchic movement names other issues Anonymous members have protested, including Government ("this is a big gray area"), GMOs, child violence, "waking the people," the financial elite, "War," and "the police state."

If you aren't motivated by any of those issues but still want to participate, you'll be pleased to know that Anonymous is not about oppressing you with its own agenda: "All who claim anyone is in charge of Million Mask March," many Anonymous-associated websites read, "knows little of Anonymous. There is no official site, and nobody is in charge: it's a movement, not an organization." It's about sending a message that "fairness, justice, and freedom are more than just words," an Anonymous-affiliated YouTube video declares. In light of these ideals, Anonymous hackers have taken down or harmed the websites of the Recording Association of America, PayPal, Sony, Fox, PBS, the CIA, child pornography websites, and many others. They also publicly support WikiLeaks and the Occupy movements. But don't underestimate Anonymous because of the apparent incoherence of their agenda: In 2012, Time named Anonymous one of the 100 most influential people in the world. 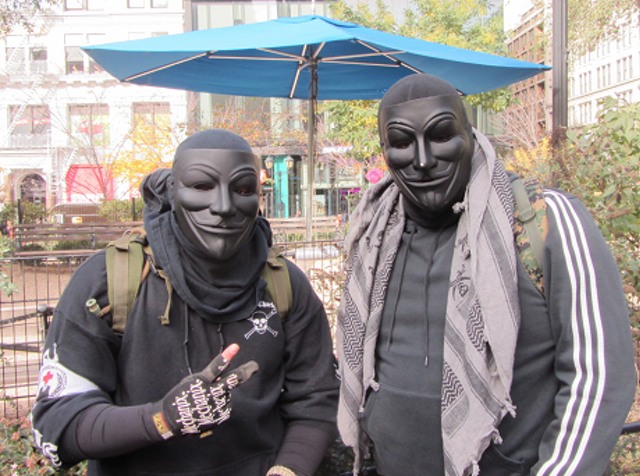 While the issues at hand are as multiform as the masks out today, Anonymous really just wants to gather together the "silent majority" into a potent force of badassery and social consciousness.

In hopes of preserving the integrity of the movement, remaining digitally and physically safe, and keeping the police (9 on bike, ~8 on foot) at arms' length, the Anonymous-affiliate Maj Houl published a helpful, even motherly, video detailing how to remain secure and Anonymous at the Million Mask March. Shown in, now perhaps ironically, a Guy Fawkes mask, the Anonymous member in Vocoded tongue asks his "brothers and sisters" to make gasmasks in case police utilize tear gas, tape and take photos as much as possible, turn off GPS on phones, and use fake names. Other websites urge activists in attendance to learn their rights and call the National Lawyers Guild (212-679-6018) if anything goes wrong. 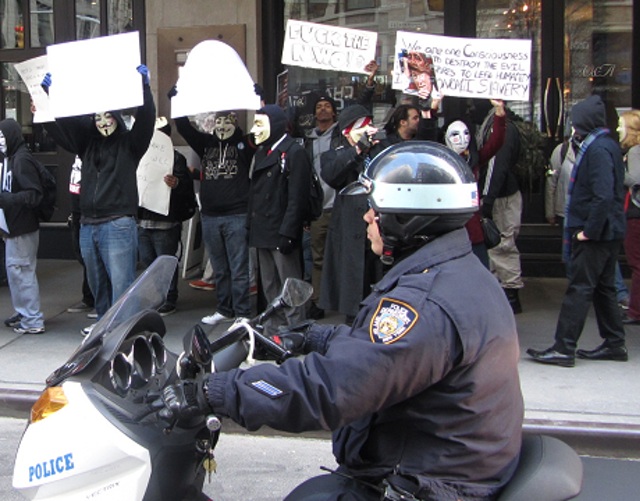 Can you still get arrested for wearing a mask to a protest? N.Y. Penal Law § 240.35(4) states that "A person is guilty of loitering when he . . . Being masked or in any manner disguised by unusual or unnatural attire or facial alteration, loiters, remains or congregates in a public place with other persons so masked or disguised, or knowingly permits or aids persons so masked or disguised to congregate in a public place." When we asked one of the many police offers if the masked protesters would be arrested, he grunted and asked us to leave him alone. There were no arrests, or even minor altercations, during the first part of today's march.

One Anonymous member explains why they wear their masks despite potential philosophical or legal conflict: "Ultimately, any counter-cultural movement has to be a pop cultural movement."

The collective is meeting again in Central Park tonight.

#guy fawkes
#million mask march
#original
Do you know the scoop? Comment below or Send us a Tip