Photos: Massive Rally For Trayvon Martin Followed By Clashes With The Police More than a dozen protesters were arrested last night during large demonstrations against Friday's not guilty verdict in the Trayvon Martin case. At the protest's peak, several thousand people converged on Times Square, blocking vehicular traffic with little interference from the NYPD.

While the day's events were largely peaceful, police and demonstrators eventually clashed on the Upper East Side, as cops deployed pepper spray and at least one bottle was thrown in the ensuing chaos.

Two rallies in Union Square protesting George Zimmerman's acquittal led to a meandering march to Times Square, as cops allowed protesters to walk in the streets and at times, against traffic. The crowd was diverse—kids sat on their parents' shoulders, couples held hands, and a peaceful mood permeated the proceedings.

As the march approached 6th Avenue, three teenage girls asked a police officer walking next to them if he supported the march. The officer smiled and batted away the question: "I can't tell you right now, I'm working. Ask me when I'm off duty."

The girls, who were all 19 and had traveled from East and West Orange, New Jersey to attend the rally, said the large turnout was encouraging. "It's not just Trayvon. This sort of thing happens to black people all the time. It's not right," Idrisah Reaves said. Her friend Imani Granger added, "It's 2013, you know? Why is this still happening?"

As the march reached Times Square, the jubilant car horns became louder and more frequent. NYPD Assistant Chief Thomas Purtell, who appeared to be commanding law enforcement on the ground, could be seen negotiating with the protest's leaders, asking them where the march's intended destination was, and kept traffic on 47th Street at bay as thousands of protesters filled the pedestrian plaza and spilled onto the road.

Assistant NYPD Chief Purtell talks with one of #justice4trayvon march leaders, asks “Where do you guys want to go?” pic.twitter.com/3WF5cMWVTX

"It's just awesome," 30-year-old Jerry Salcedo said as he stood staring at the crowd. "Everybody came together at Union Square, and even before, everybody was talking about [the protest]—it was all over Facebook." Salcedo, a maintenance man living in Brooklyn, said he hoped the protest would help the push for a civil trial against George Zimmerman. "He violated Trayvon's civil rights, his right to life. How could he get away with that? It's scary."

A woman wearing a summer dress stared skeptically at the crowd of protesters on 47th. She and her mother had just eaten dinner at Blue Fin and they walked to see what the commotion was. "If you were shot," she asked us, "You think all these people would be out here marching for you? Don't these cops have something better to do?" When we pointed out that the police were making overtime for the assignment, she replied, "Yeah, with my tax dollars." The woman, who declined to give her name, said she was from Westchester.

After around 40 minutes in Times Square, the crowd became diluted, and the march picked up again—to where, nobody was sure. This fractured march of several hundred protesters had the hallmark of previous Occupy Wall Street marches in that there was no finite destination or plan for getting there. Tensions between protesters and a large phalanx of police came to a head at East 71st Street and Park Avenue. 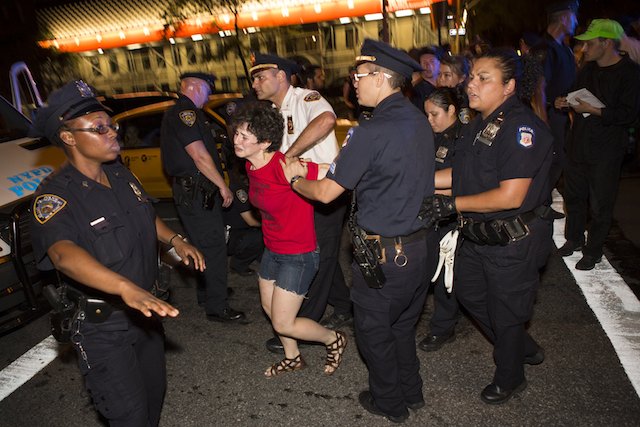 Several protesters were forced to the ground and arrested for trying to continue to march against traffic on 71st Street. An NYPD officer could be seen indiscriminately discharging his pepper spray against a group of protesters, and moments later, a glass bottle whizzed through the air and shattered on the street. More arrests. Someone pointed out that the protest had wound up right in front of the Koch brothers' apartment building. Doormen peered nervously out behind their glass walls.

A woman who was pepper-sprayed sat distraught on the sidewalk and flushed her eyes out with a milk solution. She declined to be interviewed, saying, "I'm sure other people were sprayed too."

More arrests occurred at the intersection of East 79th and 2nd Avenue. A man was violently forced to the ground as he shouted to police that he had a metal plate in his head. Dozens of police vehicles screamed up the street to meet the protesters at a new intersection. Eventually some protesters made it to Harlem, others as far as the Bronx courthouse.

Shortly before the first arrests occurred, Edla Cusick was walking hand in hand with her daughter, Kate Clifford, up Fifth Avenue near East 62nd Street.

Cusick, a painter and eighth generation New Yorker, said she was at home in Hell's Kitchen when she got an email from her daughter telling her to come to the protest. "It's thrilling. I was trying to put dinner on the table, but I came out," she said.

"People are showing, spontaneously, that they care. People care. With the Voting Rights Act getting stripped, it's open fucking season. People know it."

She added, "And they're not happy about it."

#george zimmerman
#trayvon martin
#original
Do you know the scoop? Comment below or Send us a Tip