Clean water advocate and huge swimming fan Christopher Swain became the first person to ever swim the entire length of the unfathomably polluted Gowanus Canal yesterday, an honor bestowed upon him mostly because, as he himself pointed out, no one else has ever had even the remotest desire do so before. But since, for decades now, all we've heard from city, state, and federal officials have been empty promises about cleaning up this horrendous mess, Swain decided some sort of direct action needed to be taken, if only to remind people a) how gross this water is, and b) how amazing it would be if it actually were clean.

Why is the Gowanus Canal considered to be among the most polluted bodies of water on the planet? The dumping of raw sewage into the Gowanus means it's a soup of pathogens and viruses, from E. coli to gonorrhea. Street runoff every time it rains adds things like dog shit, oil, gasoline, and plain old garbage into the mix. And piled onto the canal's bottom there's about ten to twenty feet of the REALLY toxic stuff, a "black mayonnaise" thick with coal tar and heavy metals like mercury and arsenic that had been building up since the time of the Civil War .

Swain, who has bobbed about in heavily polluted waters many times in the past, showed no fear as he slipped from his support canoe into the foamy headwaters of the canal, armored against the horrifying grossness with dry suit and gloves, swim cap and goggles, and the waterproof goo his team had rubbed onto face before the start of the swim. 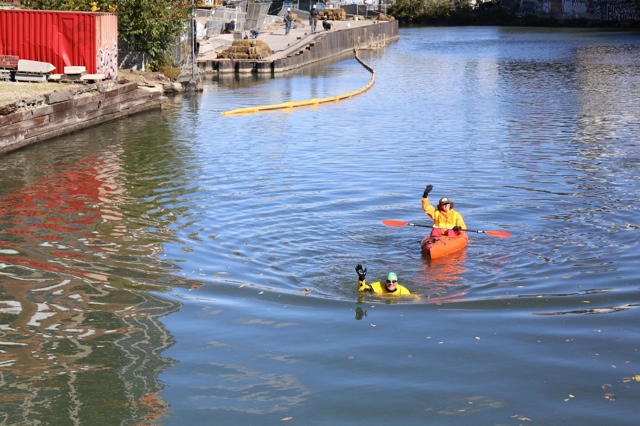 In fact, Swain was in excellent spirits throughout the entire 1.8 mile journey, taking water samples and selfies, assisting with aerial mapping using a big red balloon, answering questions from the (sadly pretty sparse) crowds of spectators at each of the four bridges along the way. 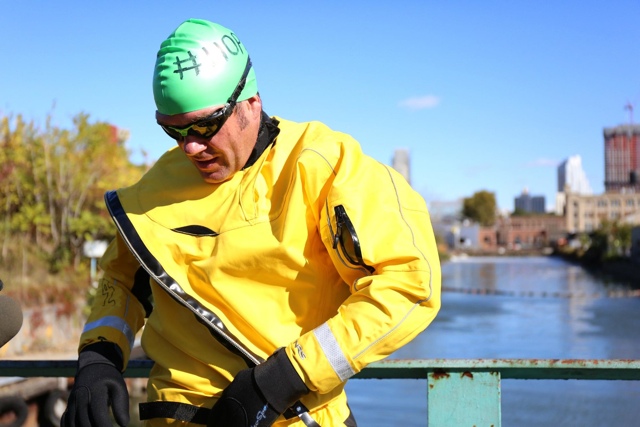 And while his initial attempt at the swim last April was foiled both by rain and a long delay spent negotiating with officials about where exactly he was going to get back onto land, yesterday's action was well planned and executed, and enjoyed the support of both the NYPD and FDNY. From start to finish Swain was in the water for about an hour.

When asked what he planned on doing next, Swain noted, "I'm going to take a shower."

#Christopher Swain
#gowanus canal swimmer
#original
Do you know the scoop? Comment below or Send us a Tip