A reader sent us these photos of a man selling a live shark at 1 a.m. on J train recently, telling us the guy was "calling out his product like he was a retro cigarette girl. He said he caught it at Coney Island after 'it bit me in the ass.' I told him I'm pretty sure sharks need to keep moving or they'll perish, and judging by the small disposable cooler he was keeping it in, the fish has likely passed on." 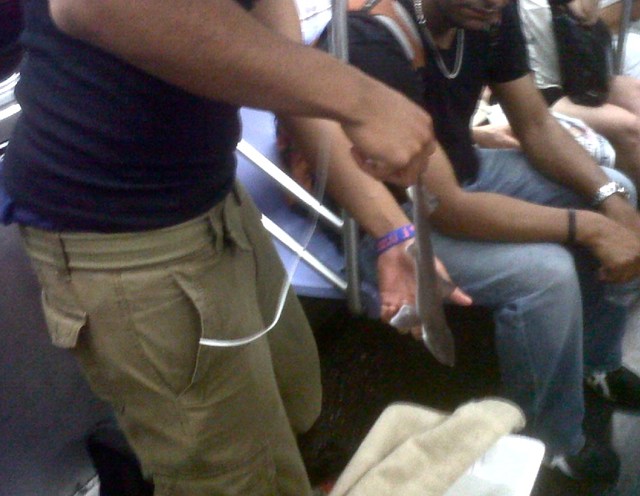 This looks like a baby sand shark, which have been spotted in Coney Island a lot. The guy was asking $100 for it, but no straphangers took the bait (at least when our tipster was on board—he boarded at Essex Street and was headed towards Brooklyn).

We've reached out to PETA and the Humane Society of the U.S. for comment.

UPDATE: PETA has sent us their official statement, saying, "This guy may get bitten in the ass again after PETA reports to the Department of Environmental Conservation (DEC) that he is illegally selling a shark on the New York subway."

And Patrick Kwan, the NY State Director of the HSUS, tells us, "the shark appears to be a young smooth dogfish shark," and adds, “This is not only cruel and inhumane; peddling animals on the subways is also against the law. Anyone who witnesses such behavior should alert a police officer, train operator, or other MTA personnel.”

#shark
#subway
#original
Do you know the scoop? Comment below or Send us a Tip