Photos: Is The Gowanus Canal Trying To Swallow Whole Foods? It's been five years since Brooklyn's first ever Whole Foods materialized on Third Avenue and Third Street in Gowanus, with reclaimed record players, gargantuan bread loaves, heretical fish displays, hogs hanging upside down, and other offerings seemingly designed to tempt the gods of conspicuous consumption. But consumption is contagious, and now the Gowanus Canal itself appears eager to consume the sprawling organic grocer.

Earlier today—before the whole city seemed as though it were going to wash away—we were informed by a tipster that the promenade surrounding the popular megachain had been closed off. "The sidewalk was cracked and is separating from the building so that it looks like an earthquake hit," our source said. "My unscientific guess is that they dredged too far and now it's eroding into the canal."

While an employee told us by phone that she has "no idea what we're talking about," our intrepid intern Madeleine Crenshaw went to see for herself, and reports back that something is indeed seriously wrong. Photos from the scene show the ground sloping toward the promenade's edge, where rows of twisting, undulating bricks form an almost perfect wave. 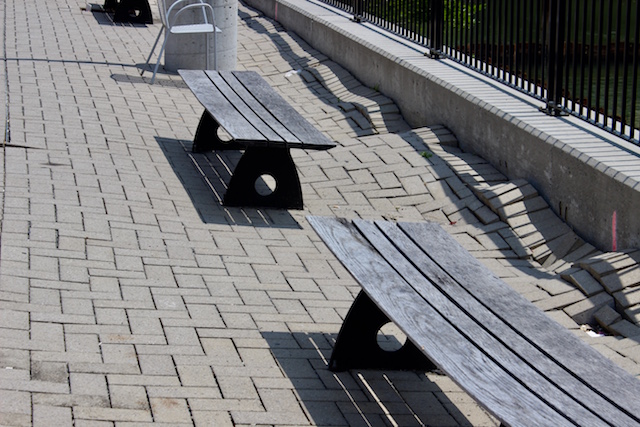 A banner at the edge of the area informs shoppers that "The promenade will be closed until further notice due to ongoing cleanup efforts and construction on the Gowanus Canal." Closer to the decay, a potted sign warns, "Watch Your Step."

The Department of Buildings says they first received a complaint about the issue in January, and soon issued a violation for failure to maintain the area in a code-compliant manner. The DOB's engineering unit conducted a follow-up inspection in April, and ordered the Whole Foods to hire a private engineer to correct the conditions. That does not seem to have happened yet.

We've also reached out to the Environmental Protection Agency, which is—in theory, at least—spearheading the Gowanus Canal cleanup. We'll update if we hear back.

In the meantime, Crenshaw tell us that the hellmouth "looks super alarming if you go up close," but that "no one seemed to notice."

#dep
#epa
#Gowanus
#hellmouth
#Whole Foods
Do you know the scoop? Comment below or Send us a Tip