Photos: Inside The MTA's "Mega" East Side Access Project, Opening In 2022ish Right under the bustling activity of Grand Central Terminal, the biggest transportation effort in the United States is taking place: The $10.2 billion East Side Access "megaproject" which will finally bring Long Island Rail Road trains to Grand Central. On a tour of the enormous caverns that will soon house eight new LIRR tracks, Dr. Michael Horodniceanu declared, "This is a project of historical proportions"—and an absolutely necessary one.

"The only way you'll remain competitive on a world map, to be like London, Shanghai, like Paris, you need to have public transport, this piece of public transport is extremely important because it brings additional flexibility to be able to bring people from Long Island to the East Side of Manhattan and vice versa."

East Side Access will serve 162,000 passenger trips a day, and the MTA believes that it'll shave 30-40 minutes off a daily commute, resulting in two to over three hours of saved time. "I'm sure people have better things to do," Horodniceanu quipped. 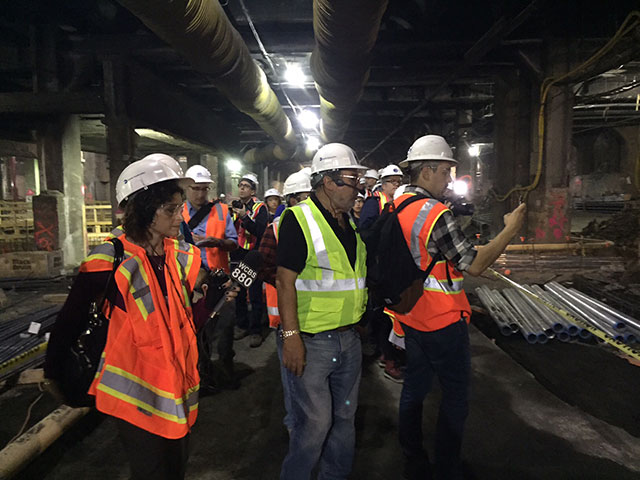 This project has been decades in the making—from the 63rd Street tunnel that stretches under the East River (construction started in 1969) to when parts of the tunnel boring machine were lowered under Grand Central (this was June 2007; the parts were then pieced together underground). The MTA is currently projecting a December 2022 completion date. Horodniceanu added that there's a 24 month buffer, so the project could be done in 2020, but there's 24 months of "just in case" time.

For what it's worth, the project is currently on budget. Horodniceanu said, "Why it costs $10 billion? New York's an expensive town. Because we're actually paying our people well—I'm talking about the labor. And that's reflected into the cost." Noting that this project involves "massive underground transportation connections in a densely populated city—if you look at the Upper East Side is 100,000 people per square mile," the MTA had to do it in a way to minimize impact on city life. 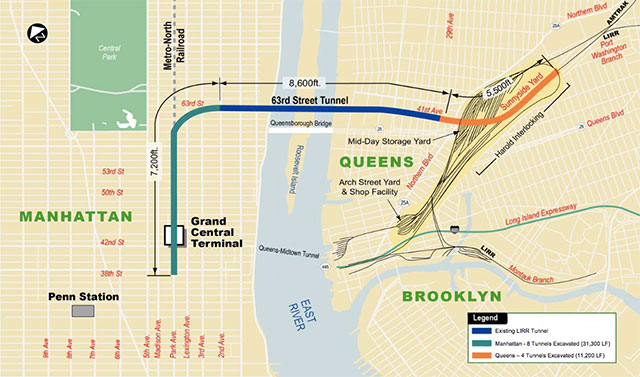 Which meant going excavating under Grand Central Terminal and Park Avenue. Grand Central is already two levels underground, so East Side Access and the future LIRR platforms are under that. The lowest platform level will be 150 feet underground, and, in total, 1.5 million cubic yards of "muck," the blasted and pulverized rock from the tunnel boring machine, were excavated from Manhattan. (Over six miles of tunnels were created in Manhattan.) The muck then traveled along a conveyor belt from Manhattan, through the 63rd Street tunnel, to Queens, where it was carted off, which Horodniceanu called a "nightmare." Another 600,000 cubic yards of muck was excavated from Queens tunnel work. (And someday all that muck will grow up to be landfill.)

Speaking of Queens, the MTA had to create two miles of tunnels, with challenges like tunneling under an IND subway structure (they had to freeze the ground before blasting it and reinforced the IND's pilings when they went in laterally). And then there's the Harold Interlocking, in the MTA's Sunnyside Yards, "a century-old intersection of 14 train tracks in Queens, where hundreds of trains traveling between Pennsylvania Station and points east and north are sorted out each day." Besides LIRR, Amtrak, NJ Transit and CSX have tracks there, and the MTA had to coordinate with all parties to build tunnels under the Harold Interlocking as well as put in new signal towers and other equipment. 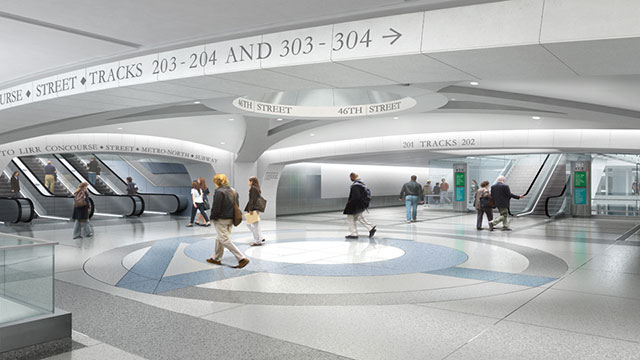 The LIRR station at Grand Central itself will be 350,000 square feet: 120,000 square feet will be for passengers and 25,000 square feet will be retail space. There will be numerous escalators traveling 180 feet (similar to the long one at the new 7 train station at Hudson Yards) in four areas; three of the escalator areas will always be operational, with the fourth available when others need to undergo maintenance. There will be two upper platforms, two lower platforms and a mezzanine. The station will be modern, but will have echoes of Grand Central. 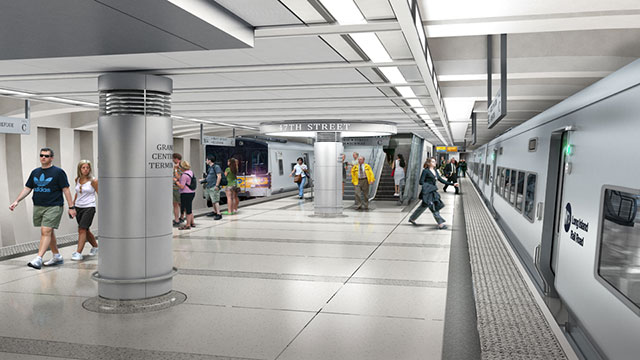 At this point, about 60% of the work has been completed on the East Side Access, and by January, the MTA expects to have committed 80% of the funds (one of the contracts out is for finishing the platforms). Horodniceneau reflected on the future legacy of the project, "I hope to be alive" when it's finished "but most of these projects, once they're done, they become the centerpiece. I'll give you the example of number 7"—the 34th Street/Hudson Yards station—"and without that there we would not be 50 million square feet of development happening around it."

From the MTA, a timeline of milestones: