Photos: Inside The $10 East Village Apartments Recently our photographer Sam Horine dropped by what we've been calling "the $10 apartments" in the East Village to capture these images that could feed our real estate envy for years. Some background: a couple of years ago developer BFC Partners made a sweetheart deal with tenants of the building that housed Mars Bar, promising them $10, tax free apartments in the brand new development, and now the tenants are preparing to move in to their shiny new units. We recently talked to BFC's Donald Capoccia about the 12-story building, known as Jupiter 21 (yes, it's a nod to Mars Bar), about the sweet deal. 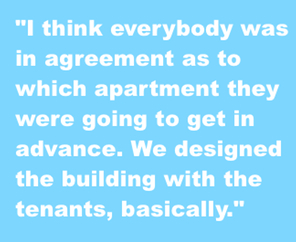 Capoccia told us the tenants did not get to choose their own units, but "the inclusionary units are larger than the market-rate units. I think everybody was in agreement as to which apartment they were going to get in advance. We designed the building with the tenants, basically." The units we saw, and that you'll see in these photos, were a one-bedroom and a studio.

It isn't often that you hear of a developer tearing down a tenement and offering old residents such an amazing deal on a new living space, so what moved Capoccia to do just that? "They were existing tenants. They were on the site. In 2000, I was approached by a tenant in this building at 1117 Second Avenue. I knew her, Ellen Stewart, she was the founder of La Mama Theater.

"She had received a letter from the City of New York telling them they were putting this building into what they called the Asset Sales Program, and that they would sell the building to the tenants. It would cost the $650,000. They did not have the resources and we partnered with them. Part of the deal was that we were going to renovate, demolish or construct a new building within which each one of these tenants was going to get a unit for a nominal cost. So that's how this happened."

Capoccia isn't new to the neighborhood, he's had a hand in transforming the East Village since the 1980s, and says he has "pioneered mixed-income housing with the City in various forms—projects where we came up with the financing scenarios that became programmatic, programs that the city has... And it's going to be an even greater challenge over the next couple years to build affordable housing. Our strategy is no different today than it was thirty years ago. Which is, finding undervalued properties in overlooked neighborhoods where we feel there's an opportunity to make change."

As for the latest neighborhood: Staten Island—"We've been doing mixed income and affordable housing in Staten Island for three or four years, and it's been very well-received and very successful. So it's a hunt for undervalued and overlooked opportunities." And in the future, he hopes to develop in Queens, "the only borough we haven't built in."

#affordable housing
#donald Capoccia
#east village
#jupiter 21
#real estate
#original
Do you know the scoop? Comment below or Send us a Tip