Hundreds of people from various activist groups packed into the American Museum of Natural History on Monday to take part in activist group Decolonize This Place‘s third annual Indigenous Peoples Day/Anti-Columbus Day tour of the museum.

The activists issued multiple demands to the museum and to city officials, including: renaming Columbus Day 'Indigenous Peoples Day'; removing the Theodore Roosevelt statue outside the museum; repatriating human remains and sacred artifacts; convening a public meeting to hear testimony on how the museum has harmed people; and putting together a committee to “oversee a decolonization process at all city museums that enjoy subsidies through taxpayer support.”

In front of the museum is a statue of a young, muscular Teddy Roosevelt on horseback with an African and a Native American slightly behind and walking on either side of him.

In January of this year, a commission set up by Mayor Bill de Blasio released a report on controversial statues in NYC and could not come to a consensus on what to do with the Roosevelt statue, resulting in the statue staying in place.

"An observation repeated several times by the Commission is that height is power in public art, and Roosevelt’s stature on his noble steed visibly expresses dominance and superiority over the Native American and African figures," the report states. "Some also see the monument as an image of racial hierarchy and linked this to the museum’s early-twentieth-century ties to the eugenics movement; the second and third International Eugenics Congress conferences were held at AMNH in 1921 and 1932, respectively."

During the tour, different activist groups gathered in each hall and spoke about the colonial perspectives embedded in these exhibits, the history omitted from them, and the way the displays dehumanize, exoticize, and exploit the people and cultures being represented.

In the Hall of African Peoples, the Black Youth Project 100 (BYP100) spoke about how the displays omit the history and brutality of the enslavement of Africans, including the museum’s own role in the exploitation and racist display of Ota Benga, a Congolese man, in the early 1900s.

“The museum isn’t just like an individual entity,” Meron Tebeje of BYP100 told Gothamist. “It works with and is intertwined with state violence that is perpetuated on us everyday.”

In the Hall of North American Forests, Abby Rojas, an indigenous activist from NYC Shut It Down, spoke about historical and present-day violence against Native women and how the museum’s colonial framing enables that violence as well as the destruction of Native land.

“I brought awareness to murdered and missing indigenous women who have been murdered in the United States and Canada,” Rojas said, noting that it is usually non-Native men who commit violence against Native women. “They come into our land and reservations, and they basically work in fracking, in mining, in oil companies. And at the same time, they feel they have permission to come and use Native women as disposable bodies because they’re never going to see them again, and the government is never going to put them on trial.”

In the Hall of Asian Peoples, the Chinatown Art Brigade and the South Asia Solidarity Initiative spoke about how many of the cultural artifacts being displayed were stolen, and how the exhibits portray Asians as backwards and primitive.

During all of this, groups of activists were also in other parts of the museum with chants, banners, and leaflets bearing anti-colonial, anti-gentrification, and anti-racist messages.

The museum’s other visitors mostly seemed amazed and amused by the activists. A couple of people attempted to troll the activists, including a white man yelling things like “God Bless the USA!”

When all the groups came together in the museum’s Grand Gallery, Hansel, a Dominican man from the Bronx who came to the museum with a friend, leaned over to peek at leaflets the activists sprinkled on the museum floor. He said he was mostly surprised and appreciative of the large group of people chanting.

“I just thought it was something to do with Columbus, but I then I see now ‘abolish white supremacy’,” he said. He noted that he was taught about an idealized history of Columbus while growing up and that it was people like the activists touring the museum that day that made him realize that “everything you learned when you were a kid is kind of bullshit.” 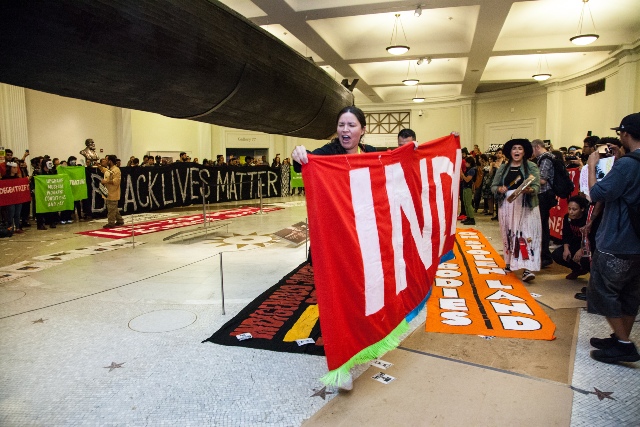 After the speakout in the Grand Gallery, the large group of activists made their way to the Roosevelt statue while chanting “decolonize this museum!” The NYPD was guarding the statue and had heavily barricaded it before anyone had even arrived that day. Police also guarded and barricaded three right-wing counter-protesters holding up signs thanking ICE and calling for Dr. Christine Blasey Ford to be jailed.

The activists rallied near the statue anyway, unfurled numerous banners, and once again, stated their demands. Then, NYC Shut It Down proceeded to hold their weekly #PeoplesMonday protest, where each week they highlight the stories of different victims of state violence.

This week, they highlighted the story of Josephine Pelletier, an indigenous woman who was killed by Calgary police on May 17th of this year. As they began marching, a large group of police, including the NYPD’s Strategic Response Group, followed the protesters. They stopped at a nearby cafe and a Trader Joe’s to tell people the story of Pelletier’s death before ending at 71st street and Amsterdam Avenue.

The museum’s leadership says they have already met with the activists to discuss their demands. "The Museum is very committed to working on issues of cultural representation in its halls," Roberto Lebron, the museum's senior director of communications, told Gothamist in an email. "We are working on a complete renovation and reinterpretation of the Northwest Coast Hall. That work, along with the Stuyvesant Diorama context project, is part of a series of things that the Museum is doing to address aspects of our halls that are out of date."

“We’ve had meetings with them,” Amin Husain of Decolonize This Place told Gothamist. “The meetings are like ‘We agree with you! We agree with you! But we have our own pace and we need to work things out.’ And we keep telling them, children are mandated to come to this museum to learn and you say you’re against white supremacy, but everything you do indoctrinates it without even saying what it is.”

But with statues and monuments across the country being vandalized and torn down without the permission of the authorities over the last few years, activists are growing tired of waiting for the city to take action. Last year, an anonymous group known as the Monument Removal Brigade splashed red paint on the Roosevelt statue and released a statement denouncing the “patriarchy, white supremacy, and settler-colonialism embodied by the statue.” More recently, in August, activists and students at the University of North Carolina took matters into their own hands and tore down a statue of a Confederate soldier known as Silent Sam, forcing the university to remove the statue. Activists here in NYC want city officials to know that the same thing can happen to the Roosevelt statue.

“There is a decolonial formation in this city that’s not going to wait for institutional inertia to alleviate the harm that’s perpetuated everyday,” Husain said. “We are impatient.”