Photos: How To Build An Atlantic Yards Skyscraper In A Brooklyn Warehouse

Critics of Atlantic Yards have been sharpening their pitchforks since Barclays Center opened its sleek polished doors last September, demanding to know what became of all that affordable housing Bruce Ratner promised so many moons ago. The answer, it turns out, lies deep in a warehouse in the Brooklyn Navy Yard. It took eons longer than many would have preferred, but it's in there.

Modular housing is nothing new. The reigning tallest building—a 24-story dormitory located in Wolverhampton, England—was finished in 2009. But the Atlantic Yards apartments, which will be rented at 50 percent market rate, 30 percent middle and moderate income and 20 percent low income, will contain a record-breaking 363 units and top out at 32 floors. All 102 workers—soon to be 125—are union. The building, called "B2" (the first of 15), will feature all the amenities Brooklynites have come to expect from their freshly constructed high-rises: A 24-hour doorman, a fitness center, a lounge, game room, a yoga studio, roof terrace and a washer and dryer in every unit. But it's not the amenities that make modular buildings unique—it's their construction.

Forest City reps compare modular housing to an assembly line, though construction, they say, is more akin to building an airplane engine than a car. Workers are "cross-trained," meaning that instead of focusing on one rote task, a team of eight to ten build entire components of the modules, of which there are 25 configurations. Apartments are composed of several modules bound together—a one-bedroom, for instance, might consist of two or three.

The modules begin with a steel frame, carted to Brooklyn in loads from Virginia. From there, workers spend around 10 days assembling its interior. Modular units are all inclusive in that everything, down to appliances and even towel racks, are installed in the warehouse, at which point they will simply be brought two miles down the road to their final Dean Street location, and stacked on top of each other using a bracing configuration standard among high-rises.

Because each unit is free-standing until snapped into place, the "mods," as they're called, are said to be more soundproof than the typical apartment building because neighbors don't share any walls. It's appealing to think of sliding one's apartment out of the building, like a hollow Jenga block, setting it on wheels and driving it straight out of the city.

People sometimes get the idea that modular housing looks cheap, said Gregg Pasquarelli, of SHoP architects, which co-designed the units. But dwelling on the building's prefab construction misses the point. "You can make a Hyundai on an assembly line, you can make a Rolls Royce on an assembly line," he said, adding that in those terms, B2 would be the equivalent of "a super nice Volkswagen, or an entry level Audi."

"This isn’t $4,000 a foot stuff on 57th Street, but I think that’s good," he said. "There's nothing inherent about modular that needs to be low-quality." 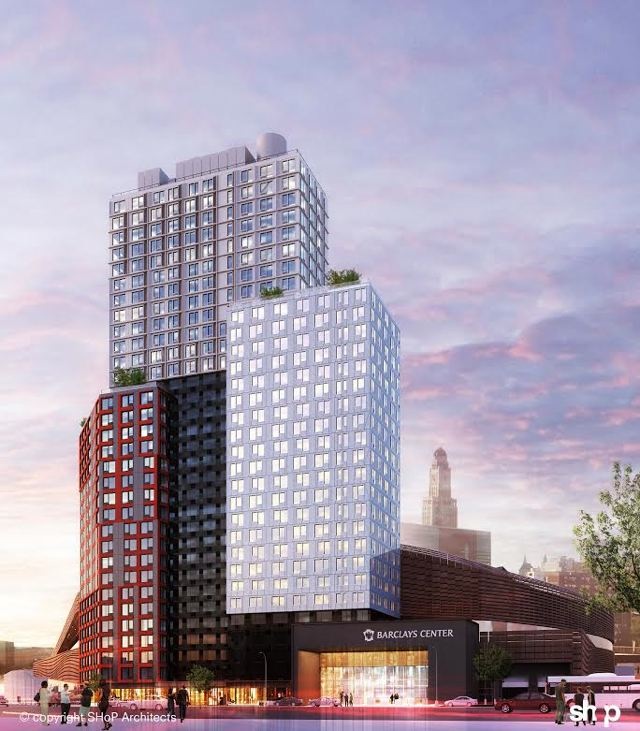 Despite employing all-union workers, the project is nevertheless facing a lawsuit from the Plumbing Foundation, since licensed plumbers are not being used in the Navy Yard warehouse. The nature of the modular design, however, means that there is no plumbing or electrical systems being attached at the factory—all of that is packaged with the structures and done on-site.

As of now, the units are around 10 percent cheaper than their conventional counterparts, though Melissa Burch, Forest City's Director of Commercial & Residential Development, anticipates savings of up to 30 percent as the technique is perfected.

"Frank Lloyd Wright, Buckminster Fuller—all of these people for years have been kind of thinking and dreaming and playing around with modular," she said. "It has captured the imagination of a lot of different types of people."

So why, considering its advantages, is Forest City the first to innovate the modular technology? Atlantic Yards' steep low-income housing requirement has something to do with it.

"Necessity is the mother of invention," she added. "We had a business challenge to solve."

If all goes as planned, the stacking of the mods will commence next week, so keep an eye out for entire apartment units being snapped into place.