Photos: Hope You Didn't Park On This Block In Williamsburg...

A former warehouse and construction site collapsed in Williamsburg on Wednesday morning, raining bricks and scaffolding onto the sidewalk and street below, and wrecking a few parked cars. Miraculously, no pedestrians were injured, police said.

A tipster told Gothamist that she witnessed the structure give way at around 8:30 a.m. this morning on the corner of North 13th Street and Wythe Avenue. "When I was running past, part of the brick wall was still collapsing, with a huge cloud of dust in the air," she wrote. "It looks like a demo site gone wrong. Plenty of construction workers were gathering around." 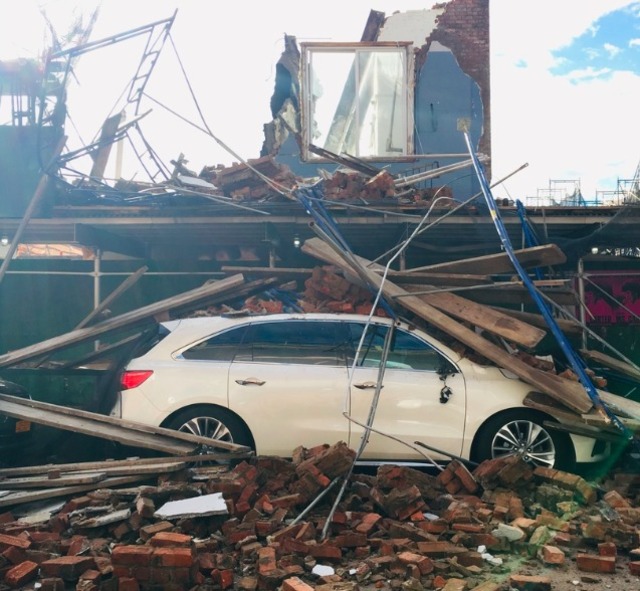 The NYPD confirmed that there were no injuries, and directed further questions to the Department of Buildings. A spokesperson for the DOB said investigators were still en route to the scene at about 9:30, but could not provide additional details.

The collapse occurred at 29 Wythe Avenue, a former two-story warehouse building most recently owned by False Alarm Ltd. Earlier this year, the DOB issued a stop work order at the site, after an inspection revealed that demolition and excavation was underway without an adequate site safety plan or necessary permits. Several of those offenses remained unresolved as of this morning.

Efforts to reach False Alarm Ltd. were unsuccessful. It's unclear what the group was intending to build on the site.

#false alarm ltd
#greenpoint
#scaffolding
#scaffolding collapse
#williamsburg
#original
Do you know the scoop? Comment below or Send us a Tip