An epic drug bust resulted in the seizure of all kinds of goodies by the city's Special Narcotics Prosecutor yesterday, including two guns, more than 20 pounds of weed, two pit bulls and an 8-foot-long python, all which were crammed together in a Harlem basement within spitting distance of a playground.

Mark Hansen and Manuel Bay were arrested yesterday following an eight month investigation by the NYPD, after the two allegedly sold more than six pounds of marijuana to an undercover officer over the course of ten transactions—a total value of $9,200. Both men also allegedly sold the officer one firearm each, netting a total of $1,700. 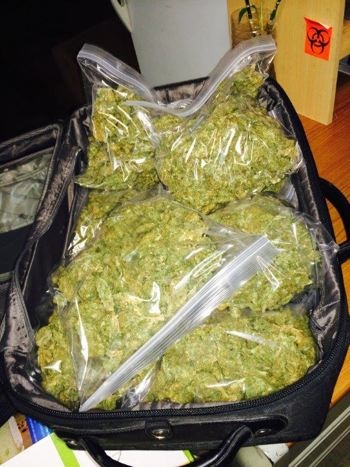 Upon arriving at the East 124th Street apartment for a court-authorized search, officers discovered the menagerie of animals and weapons and weed being stored in the basement, directly across the street from the playground at Marcus Garvey Park.

The dogs and the python—which was nestled in a tank—were handed over the ASPCA, and the revolver, marijuana and roughly $1,200 were photographed for your edification. (Sadly, authorities claim there are no photos available of the dogs or the snake, and that no evidence exists that either ever wore sweaters fashioned from soft, sticky piles of herb or trained themselves to load and fire a revolver using only their tails.)

The surrounding community has long been aware of Hansen and Bey's alleged drug trade, with neighbors complaining that customers would line up outside the apartment's first floor hallway seven days a week to make their purchases, which were conducted through a slot in the door, forcing residents to squeeze by as they attempted to reach their own apartments.

Both Hansen and Bey face charges of weapons sales, and several counts of criminal sale of marijuana. They are expected to be arraigned today.