Photos: Giant Fanged Sea Lamprey Surfaces In NJ To Give Us Night Terrors

Oooh check out this cute li'l guy that one lucky New Jersey man recently caught while bow fishing in the Garden State! It's called a sea lamprey, an aggressive species of fresh water parasite that decimates indigenous fish populations with its ravenous bloodsucking orifice. Some folks say they make for good eating—especially if you salt them while they're still alive—but we wouldn't want to get too close them in open water. As you'll no doubt recall, the Roman equestrian Publius Vedius Pollio was infamous for feeding his slaves to a pool of pet lampreys:

Vedius owned a massive villa on the Gulf of Naples, later described by the poet Ovid as "like a city". Most notoriously, he kept a pool of lampreys into which slaves who incurred his displeasure would be thrown as food - a particularly unpleasant means of death, since the lamprey "clamps its mouth on the victim and bores a dentated tongue into the flesh to ingest blood."

Fascinating creatures! Wikipedia also tells us that lampreys use their teeth to latch onto their victims, at which point "secretions in the lamprey's mouth prevent the victim's blood from clotting. Victims typically die from excessive blood loss or infection." Luckily, their bloodlust doesn't target humans as long as there are other food sources available, but we're going to be swimming with a harpoon for the rest of our lives just to be on the safe side.

The Daily News reports that sea lampreys, which have been showing up in New Jersey waters with greater frequency since aging dams have been removed, typically measure up to about 3 feet. This bad boy appears to be significantly larger, and in the eyes of Huffington Post blogger Sarah C Nelson, it is "somewhat phallic looking." Or, as one Redditor put it, "Worst. Fleshlight. Ever." 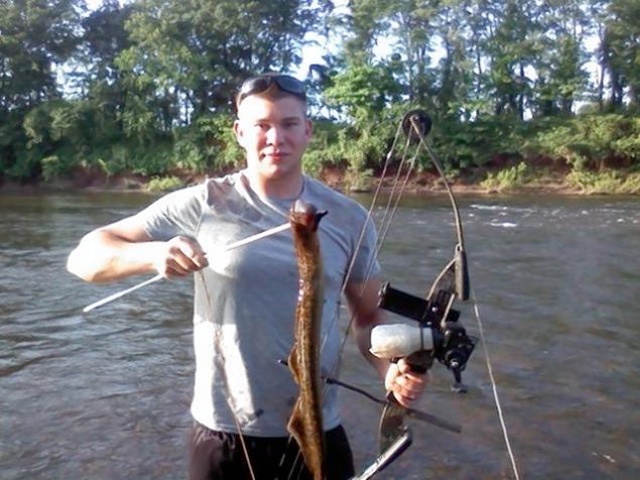