The first batch of citywide ferries have finished the journey from the Floridian mudbanks to Pier 1 in Brooklyn Bridge Park, where Mayor de Blasio was on hand this morning to welcome them with a couple of dad jokes.

Two of the total 20 new ferries (now with booze!) journeyed from Liberty Landing in New Jersey to Brooklyn Bridge Park this morning for their first official dedication ceremony. The ferries, operated by San Francisco-based company Hornblower, will service multiple routes in Queens, Manhattan and Brooklyn, including Far Rockaway and Astoria—in 2018, the service is expected to expand to the Bronx as well. Rides will cost $2.75 each way. De Blasio called the expansion "part of the next wave of transportation in this city."

"It's going to be a new day for our city and a new chance for people to get around in a better way and easier way," the mayor said today. "It's going to create so many good options for people to choose from. It's going to improve the quality of life for New Yorkers to have the ferry service as part of our everyday life, as something people can depend on." The expanded service starts rolling out May 1st, ahead of schedule. 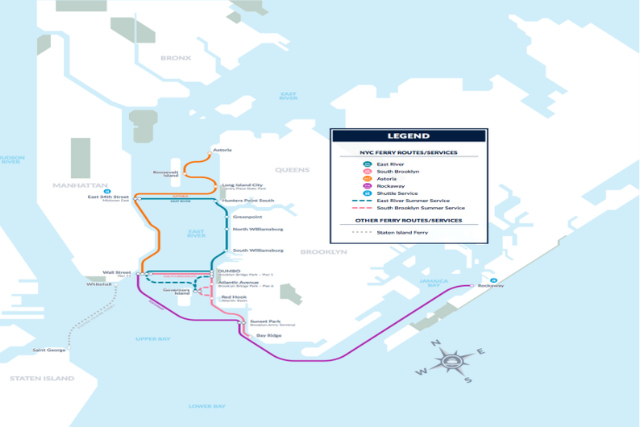 In addition to announcing the start of service, Deputy Mayor Alicia Glen "christened" the new fleet's first vessel, named "Lunchbox" by a bunch of enterprising second graders in Bay Ridge. Ensuing vessels will be named "Friendship Express" and "McShiny." Second graders should be in charge of everything.

Check out a complete gallery of the Mayor's dedication, as well as the first onboard tour of Lunch Box, above. You can peruse the new schedules and landing docks here.

#bill de blasio
#citywide ferry
#ferry
#mayor de blasio
#original
Do you know the scoop? Comment below or Send us a Tip