Blocks of the Flatiron District remain closed off as the city and numerous agencies continue the cleanup process after the Thursday steam pipe explosion that sent asbestos and other debris flying. Today, people who had been in the area at the time of the blast returned to drop off their contaminated clothing and other belongings at tables set up by Con Ed.

Steven Butschi was bicycling to an exercise class around 6:50 a.m. on Thursday, ten minutes after the explosion. "I saw everything coming out of the ground... It looked like a fire," he recalled. "It felt like you were riding through a mist."

He eventually got to his workout, after adjusting his route for the suddenly blockaded streets, but once there, "I realized there were little specks of concrete and other debris that were on my backpack, and my helmet, and my clothes. I didn’t think much of it," he said.

The pipe's rupture caused a large hole in Fifth Avenue—and a dank odor not unlike a musty basement still permeates the area.

On Thursday afternoon, Con Ed confirmed that asbestos lined the steam pipe, which dated back to 1932. Butschi, who lives in Long Island City, heeded the city's recommendation to drop off his belongings with Con Ed, which set collection boxes at Broadway and 19th Street. "Unfortunately, it was my helmet, all my clothes, a backpack, a speaker, a whole bunch of things, so hopefully I’ll get reimbursed," Butschi explained.

The FDNY responded to a report about a steam explosion 121 5th Avenue (between 19th and 20th Streets) at 6:39 a.m., and units started to evacuate the areas soon after. The blocks between 19th and 22nd Street and between Broadway and Sixth Avenue are considered a "potential affected area," with some blocks marked as "hot zones" and others as "warm zones."

According the Office of Emergency Management, 49 buildings were evacuated and 44 have been and/or in the process of being inspected for asbestos contamination. An estimated 500 individuals were "displaced from 249 residential units within the potential affected area." (Displaced residents are staying in hotels and will be reimbursed by Con Ed.) 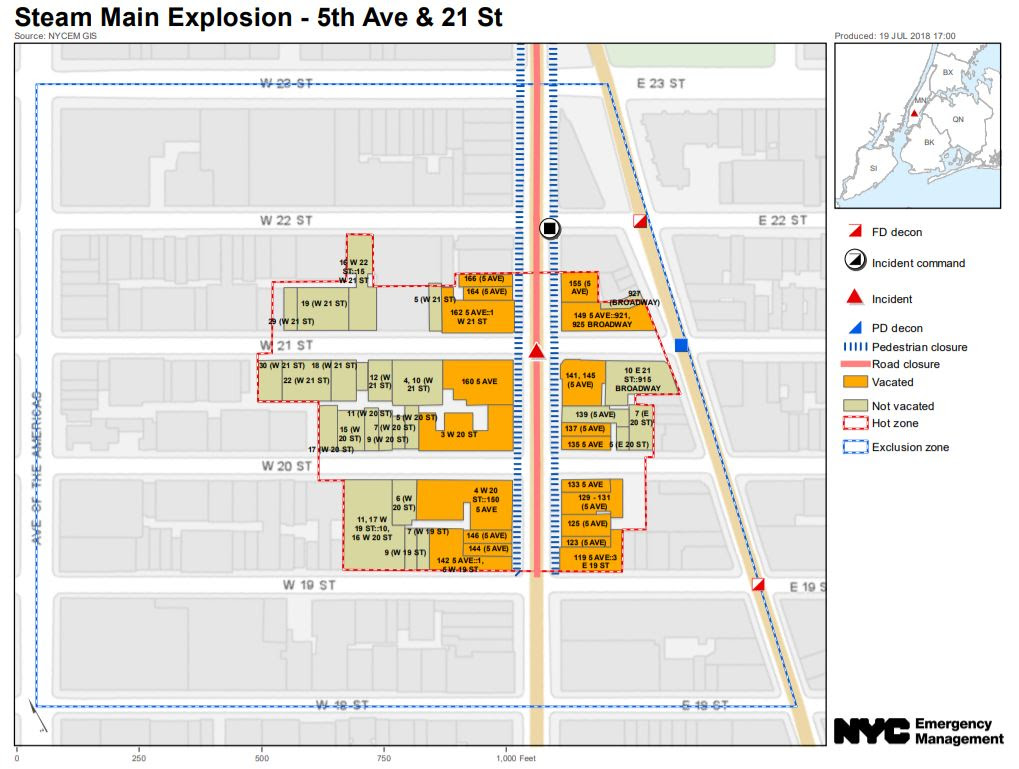 Map of the blast and potential affected areas (NYC OEM)

Dr. Neal Blitz was not told to evacuate his apartment at 19th Street and Broadway, and remains skeptical about the designation of "potential affected area." He told Gothamist, "What’s even more alarming, is that they are saying, 'Well you’re only really at risk at these blocks. I’m sure there are professionals that understand air quality, but, on this side of the street, I’m safe but on the other side of the street I’m in danger?"

On Thursday, Blitz, a foot surgeon, had been walking to begin his day of surgeries and was at Broadway and 20th Street when the pipe exploded. He saw "billowing smoke" come down the streets. "I was also on Lexington Avenue a few years ago when that steam pipe exploded too, so when I saw it was white smoke I was less concerned," he said. "And I suspected that it was a steam pipe explosion, but still I did not realize the health risks that would come from this particular steam pipe explosion."

He was slightly reassured when he saw workers deem the block beneath his windows safe enough to be a decontamination zone where they removed their hazmat suits, but it was still a surreal sight: "I’m looking down on this last night, and it’s a scene out of Ghostbusters or X Files."

Blitz was also dropping off his belongings with Con Ed for decontamination this morning. His main concerns are "one, the immediate exposure which is definitely there, and, two, the exposure to the building’s facades, and just touching a building, or even walking my dogs on the street having their paws," he said, motioning to his mini Dalmatians, Maddy and Finn.

The health risk to Thursday's blast is believed to be small; the NY Times reports, "[C]hronic exposure — often over years or decades — is the real danger, medical experts said." Dr. Norman Edelman, a pulmonologist and professor at Stony Brook University, told the Times, "In my opinion, the increased risk of lung cancer will be not very great at all."

At a press conference at the site on Thursday, Mayor Bill de Blasio asserted that the air quality is safe to breathe. "Our concern is the debris that was thrown off by the rupture, some of that is still visible on the street and on the buildings' facades," de Blasio told reporters. "That all needs to be cleaned up."

The cleanup will continue for the foreseeable future. One commercial building worker, who described the blast as looking like "Old Faithful," claimed that soot and debris went up to 8th floor of some buildings near the blast. Con Edison says that an environmental contractor could start washing buildings as early as this afternoon.

The cause of the steam pipe explosion remains under investigation.

#asbestos
#con ed
#flatiron district
#steam pipe explosion
Do you know the scoop? Comment below or Send us a Tip