For many, the whirlwind afternoon press tour marked a first glimpse of the bright, vaulted, rat-free station. "There's high ceilings, there's column-free designs, and there's an airy feeling—unlike what you see in the majority of the subway system," Prendergast said.

The northernmost Second Avenue station to date, 96th Street marks the end of Phase I of the project, along with two other new stations at 72nd Street and 86th Street. The line has been in the works for almost a century, and cost $4.5 billion to date.

"The train is going to run if we have to push the train down the track," Cuomo told the crowd, Thursday. "It was important that we meet the deadline. Why? Because we wanted to make a statement."

It's been almost a decade since the project's most recent groundbreaking, and delays have been frequent. The governor himself has been checking in regularly for about the last year-and-a-half.

Congresswoman Carolyn Maloney heaped praise on the station. "This is an achievement that is right up there with the construction of the pyramids as a marvel of what human kind can build," she said, standing before a large porcelain tile mural by artist Sarah Sze that recalls paper blowing in the wind. "Only the pyramids don't have this artwork!"

She was also the only politician to explicitly mention the project's next phase, which will extend the long-awaited line up to 125th Street in East Harlem. "Governor Cuomo has already put into the budget $1.5 billion for the next phase of the Second Avenue Subway," she said. "We will not be waiting 100 years for the next phase."

That $1.5 billion has fluctuated in recent years. Announcing his finalized 2016-17 budget in March, Governor Cuomo promised to restore the full $1 billion cut from phase two last fall, albeit in stages—$500 million in 2019, and a minimum of $443 million in the next Capital Plan, covering 2020-24.

William Henderson, director of the watchdog group Permanent Citizens Advisory Committee to the MTA, told us this spring that such commitments can be dubious. "It's in the state's financial plan, but only next year's budget is binding, so what does 'commitment' mean here?" he said. "It's basically [like saying] 'my word is good.'"

With the first $500 million, the MTA hopes to get preliminary engineering work for phase two underway. Tunnel boring still isn't expected to begin until after 2019. 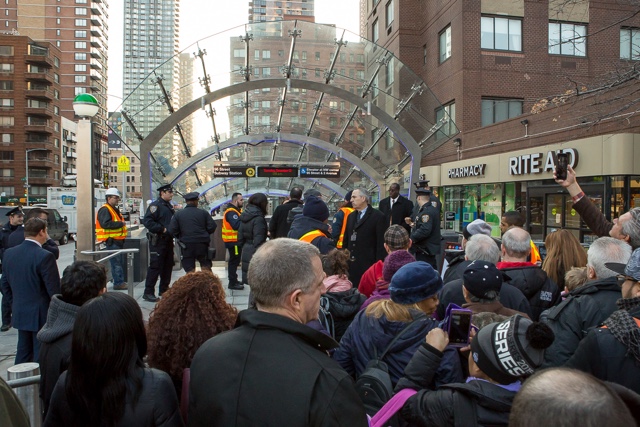 Cuomo made no explicit mention of phase two before Thursday's press conference shifted into its own second phase—a borderline dangerous crush of news cameras maneuvering for shots while the Governor, Congresswoman Maloney, and Prendergast stepped ceremoniously into the station (no turnstiles yet, just shiny silver arches).

Taylor Swift's "Welcome To New York" played over the sound system as the group walked quickly along the platform, passing a kiosk full of subway themed cookies and pausing occasionally for Prendergrast to point out features like the glass, mid-platform elevators and contiguous welded tracks (which are quieter, since the train doesn't have to clack over welded joints every 39 feet). Cuomo, grinning and waving, took no questions. At one point, he said, "I have no words."

"I mean, you know this is a big deal that we're going to see the opening of the Second Avenue Subway," said Straphangers Campaign Coordinator Jaqi Cohen on Thursday. "It's something we've been waiting for as New Yorkers for almost 100 years. I'm happy the governor is so enthusiastic. While he's down moving the Second Avenue Subway along, let's keep in mind that it's not the only aspect of the subway."

Mayor Bill de Blasio, who recently expressed interest in attending the official January 1st opening of the Second Avenue Subway, was not present at Thursday's congratulatory press tour. While Governor Cuomo controls the MTA, appointing the chairman of its board, NYC has committed billions to the system. Fresh off his latest highly-publicized spat with the governor—this time, over the fate of a one-antlered deer—the mayor sent First Deputy Mayor Anthony Shorris to 96th Street in his stead.

A spokeswoman for Cuomo's office told Gothamist, without prompting, that de Blasio had been invited on Thursday morning, before the press conference was formally announced (the event was apparently solidified Wednesday night). A de Blasio spokesman said the mayor was otherwise engaged—his public schedule for the afternoon included bill signings and a photo op with 16 formerly homeless veterans who moved into affordable housing in the Bronx.

The 96th Street station will be open to the public for tours today from 8:00-10:00 a.m., and 5:00-7:00 p.m. The Second Avenue Subway is scheduled to open on January 1st at noon, but regular service won't start until the following week.

#96th Street
#governor cuomo
#second avenue subway
#tour
#original
Do you know the scoop? Comment below or Send us a Tip