Just hours after President Donald Trump and Speaker Paul Ryan failed to replace Obamacare, there was an immediate reminder that fight against the current administration is on many fronts. More than 100 protesters gathered in Columbus Circle to express their outrage over the White House's approval yesterday for the completion of the Keystone XL Pipeline.

The construction of the $8 billion TransCanada KXL Pipeline, which would transport oil directly from the drilling fields of Canada and North Dakota to refineries and export facilities along the Gulf Coast, was rejected by President Obama in 2015. Opponents of the pipeline fear the potential for environmental disaster along the route, and insist that it also sends the wrong message to a world struggling with how to deal with the effects of climate change.

The president of TransCanada, Russ Girling, said yesterday, "This is a significant milestone for the Keystone XL project. We greatly appreciate President Trump's Administration for reviewing and approving this important initiative and we look forward to working with them as we continue to invest in and strengthen North America's energy infrastructure."

The Rally to Save Our Planet From KXL and Trump, began across from the Trump International Hotel, with chanting and a few speeches from local environmental groups like NYRenews and 350 NYC. Dozens of people then marched to Governor Andrew Cuomo's office in Midtown East, passing through Time Square on the way. The latter is always a strange, discordant venue for a protest, with bright LED-enabled consumerism and packs of tourists often overwhelming the message of a march. 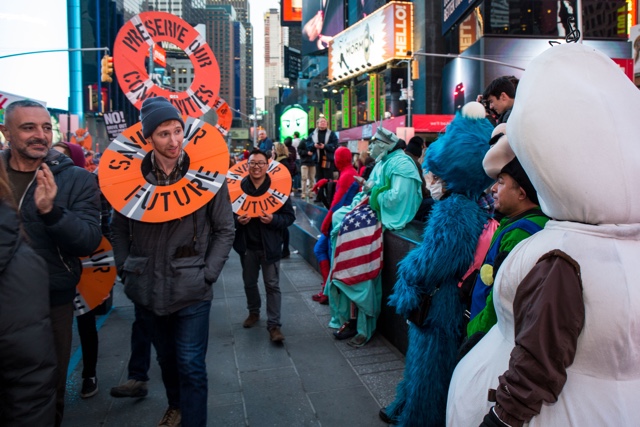 The NYPD kept a close watch on the No KXL march the entire way—the protesters were relegated to sidewalks, pedestrian plazas, and, as it happens, bike lanes—and helped with traffic. There was no tension between the two groups.

At the Governor's office building, there were a few more speeches—the message here was that if the Federal government won't help fight climate change, the State needs to raise its profile in that department—and then many protesters left to join the NYC Resists Hate Crimes march, across town, a concurrent action sparked by white supremacist James Jackson's hate-crime murder of Timothy Caughman.