Hundreds gathered in both Staten Island and Manhattan Friday to observe the one-year anniversary of Eric Garner's death at the hands of the NYPD. Amid a sea of homemade signs and protest chants that echoed throughout the afternoon and evening, Garner's last words were by far the most prominent—an impassioned, outraged refrain: "I Can't Breathe."

As the day wore on, the somber rallies and vigils became defiant protest marches remembering Garner's death and condemning a Staten Island jury's decision not to indict Daniel Pantaleo , the NYPD officer who used an ultimately fatal chokehold while trying to arrest him on suspicion of selling loose cigarettes outside a deli. These marches recalled much of the fervor that led to mass street closures and arrests last December, but were much smaller in scale and, in this case, tightly confined by the police to sidewalks, public squares, and Penn Station. Though in one instance, a sit-in on 34th Street resulted in the arrest of over 20 protesters.

Demonstrations began just after 1 p.m. at the Staten Island Ferry's Manhattan Terminal, where approximately 40 people hoisted signs and passed out flyers calling for an end to "police terror." Brooklyn resident Travis Morales, 62, wielded a megaphone, to call out "an epidemic of the police murdering black and brown people with impunity."

"There is no middle ground, there is no neutrality. You're either on the side of police killing, or you're in the side of those who say 'This must stop,'" Morales told the crowd.

Once on Staten Island, Morales's group joined up with protesters already gathered in the borough and marched toward the site of Garner's death. The 30 or so demonstrators briefly took to the street, claiming one lane of traffic as many passing motorists honked their horns in signs of support.

Police presence on Staten Island was restrained as demonstrators eulogized Garner. The protest managed to reach Bay Street almost a year to the exact minute when Garner was killed, and quickly congregated with other demonstrators around the small memorial that has been built (and rebuilt) in his memory. Tense silence fell over the crowd as one organizer called 11 protesters forward, one by one, by name. Each laid a single white rose upon Garner's memorial before turning to shout "I can't breathe!"—one rose and one cry for each of the 11 times that Garner pleaded with the NYPD to let go.

One of the 11 to set down a memorial rose was Franklin, a 14-year-old boy from Harlem. "I'm just tired of it and I'm ready to act," he said. "It made me feel upset, just like when they killed Sean Bell and other people."

"I better watch my step," he added. 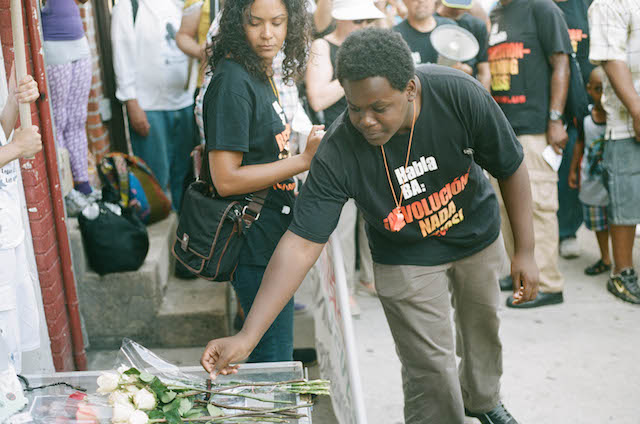 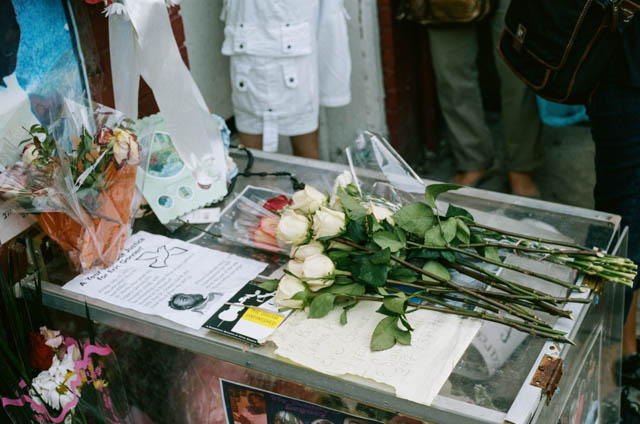 A much larger group of demonstrators, including many who visited the Staten Island memorial in the afternoon, gathered in Columbus Circle at 5:30 p.m. Friday for a protest organized by Millions March NYC. As their speeches and chants grew in intensity, NYPD officers made a small number of seemingly random arrests, enraging the crowd of hundreds just before it headed southward, passing through Rockefeller Center on to 7th Avenue, where it was contained to the sidewalk as it continued downtown.

This man Colin was just cuffed and arrested for literally nothing.

Unlike an April protest in which the NYPD succeeded in fracturing a large group of protesters into small, disorganized groups, Friday's protesters remained tightly organized and communicative in their movements. Police officers flanked the group closely as it wound into Herald Square, deploying a military-grade LRAD sound cannon to threaten arrests. Undeterred, protest leaders called for a sit-in and minute of silence in remembrance of Garner. After a minute had passed, the group began shouting "I can't breathe!," counting to 11 each time before beginning from one again.

As protesters once again began moving, tensions between them and the police escalated. Many chanted "How do you spell racist? NYPD!" and some lobbed obscenities directly at cops. One man holding a sign singled out an officer of color and shouted "What happens to you when you take off that uniform? They'll fuck you up just like me!" 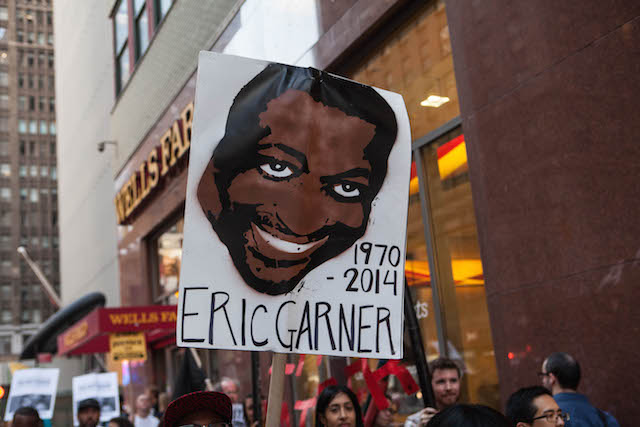 The night climaxed in an act of civil disobedience as over twenty protesters linked arms and sat down in the middle of 34th Street. "If you're willing to get arrested, come forward," an organizer called out. One of the women prepared to face jail was Q.B., 21, of East Harlem. She said getting arrested was worth it "so that Eric didn't die in vain. It should have been an arrest that happened to him, instead of death. This is necessary."

"All we want to do is commemorate the death of Eric Garner, who was killed by the NYPD," she said. "We're peaceful, we're organized, and yet they won't let us march, they're targeting our organizers. They're just keeping oppressed voices silent."

Police officers swarmed around protestors seated in the middle of the road and began pulling them to their feet to arrest and handcuff them. An NYPD spokesperson confirmed that approximately two dozen protesters were taken in, with most charged for disorderly conduct.

Despite the arrests, demonstrators charged forth into Penn Station, banging on walls and raising their voices in the underground echo chamber. Shopkeepers and travelers looked on as the group shouted "What's his name? Eric Garner! Say his name! Eric Garner." One woman raised her hand to reveal a blue wristband—a sign of police solidarity—but police quickly surrounded the woman, holding back angry protesters as others called, "Move on! Keep going forward"

As they wound out of the train station and back onto the sidewalk of 8th Avenue, the protest crowd began to dwindle. Tyson Tanner, however, remained resolute. The 36-year-old Manhattanite, who is black and also Republican, said the demand for just policing transcends politics. "You know what, Republicans helped to free slaves and this is about freeing people from injustices," he said. "My point is to show that all political sides should be supporting us."

#black lives matter
#eric garner
#nypd
#staten island
#original
Do you know the scoop? Comment below or Send us a Tip