With DUMBO quickly transforming into a luxury-condo landscape, and with the Brooklyn Bridge Park waterfront being further developed every day, the city is now ready to dig its shovels into the mostly underdeveloped, unused area that connects Brooklyn Heights, DUMBO and Downtown Brooklyn. A major renovation could happen that would change the look and function of many outdoor spaces in the area just off the Brooklyn Bridge pedestrian walkway.

This is a gateway to Brooklyn for many tourists, but the area is also passed through daily by locals, many who commute via the bridge, and that surrounding space is in much need of change. The current state by the walkway entrance is one of eternal construction, orange cones, and a Fro-Yo truck that idles and fills the partially enclosed space with fumes.

The plan includes changes that would start under the Bridge, near Prospect Street, move up to Cadman Plaza, and go all the way to Borough Hall... and then some. It's called Brooklyn Strand, and the craziest part of it may be a cafe that's inside of the bridge. 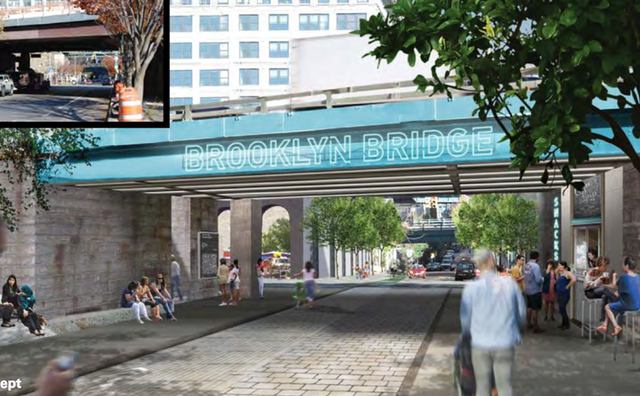 The proposal was presented to Community Board 2 last week, and still needs approval from various governmental agencies, as well as funding. But with major stakeholders like the MTA, the DOT, the Brooklyn Borough President, and the Parks Department behind the plan, this all seems more a question of when, not if.

If the plan moves forward, you can also expect: a completely new Cadman Plaza, underground parking, better/more bike lanes and walkways, retail spaces, cafes, and pedestrian plazas. The 54-page proposal (which you can look through here) also notes that they will identify and create opportunities for affordable housing development on Strand sites.

Someday soon, realtors will be marketing this area as UBBO: Under Brooklyn Bridge Overpass.

#brooklyn bridge
#brooklyn strand
#downtown Brooklyn
#dumbo
#renderings
#ubbo
Do you know the scoop? Comment below or Send us a Tip