About two dozen protesters gathered at Dr. Ronald McNair Park in Crown Heights on Saturday to protest tenant harassment and call for housing justice. Despite the blistering heat, protesters marched from the park to various buildings in the neighborhood—places they described as active sites of tenant harassment—stopping to hand out flyers along the way.

"Crown Heights is basically Ground Zero for gentrification," Donna Mossman of the Crown Heights Tenant Union told Gothamist. The Tenants Union was founded in 2014, after Mossman and other neighborhood residents decided to mobilize against harassment by their management company, BCB Property Management, which Mossman said was trying to illegally drive rent-stabilized tenants from the building. 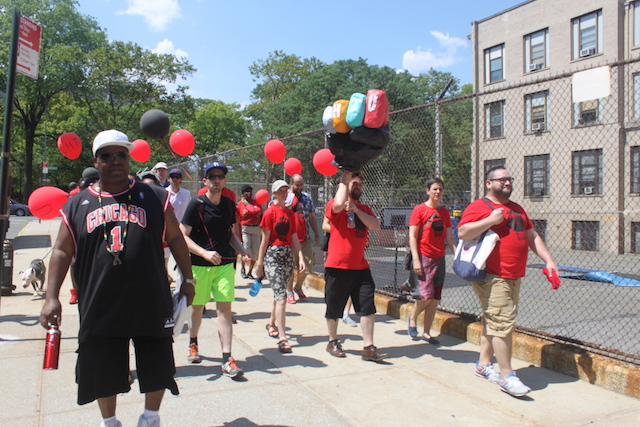 While BCB did repairs on vacant apartments, tenants who did not take the buyouts began to find themselves without basic necessities, like heat and hot water. Mossman said she had no heat in her apartment during the 2014's brutally cold Polar Vortex.

"We called 311 so much that we ended up on the Alternative Enforcement Program's '100 Worst Landlords' list," Mossman said. 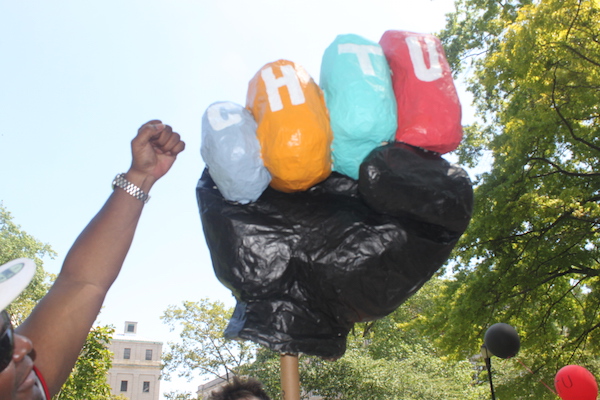 Protesters' first stop was 1045 Union Avenue, where tenant Marcia M. discussed the changes that were being made to the building. "This is a 35-unit building," Marcia said. "There are about 5 units with long-standing tenants, and these new tenants are paying up to $4,000 for an apartment."

Although the march was small and relaxed—protesters stuck to the sidewalk, did not use noise-amplifiers, and were generally respectful of traffic laws—protesters were still followed by the NYPD throughout the course of the march.

The next stop was the Union Street Pub, a new neighborhood bar that some locals think feels out of place and caters only to new residents. "We don't need bars, we need pharmacies, youth centers, employment centers for adults," Nefertiti McCaulay said.

It would be easy for the CHTU to blame new tenants—gentrifiers—for both the harassment they're facing and the changes that have occurred in the neighborhood. Crown Heights' new renters are not only wealthier than long-standing tenants: they're also younger, likely to be lured in by trendy bars and restaurants, and they're typically white. Between 2000 and 2010, Crown Heights lost nearly 12% of its black population while its white population grew. But instead of playing up the economic and racial divides between new and old tenants, the CHTU strives to bridge the gap between them.

"It can be easy for older, existing tenants to put some blame on new tenants," Kerri White, one of the CHTU's main organizers. "Their apartments are starkly different: old tenants have to go a long time without repairs, while the new apartments are completely renovated. But after [new tenants] move in, they often have similar struggles." 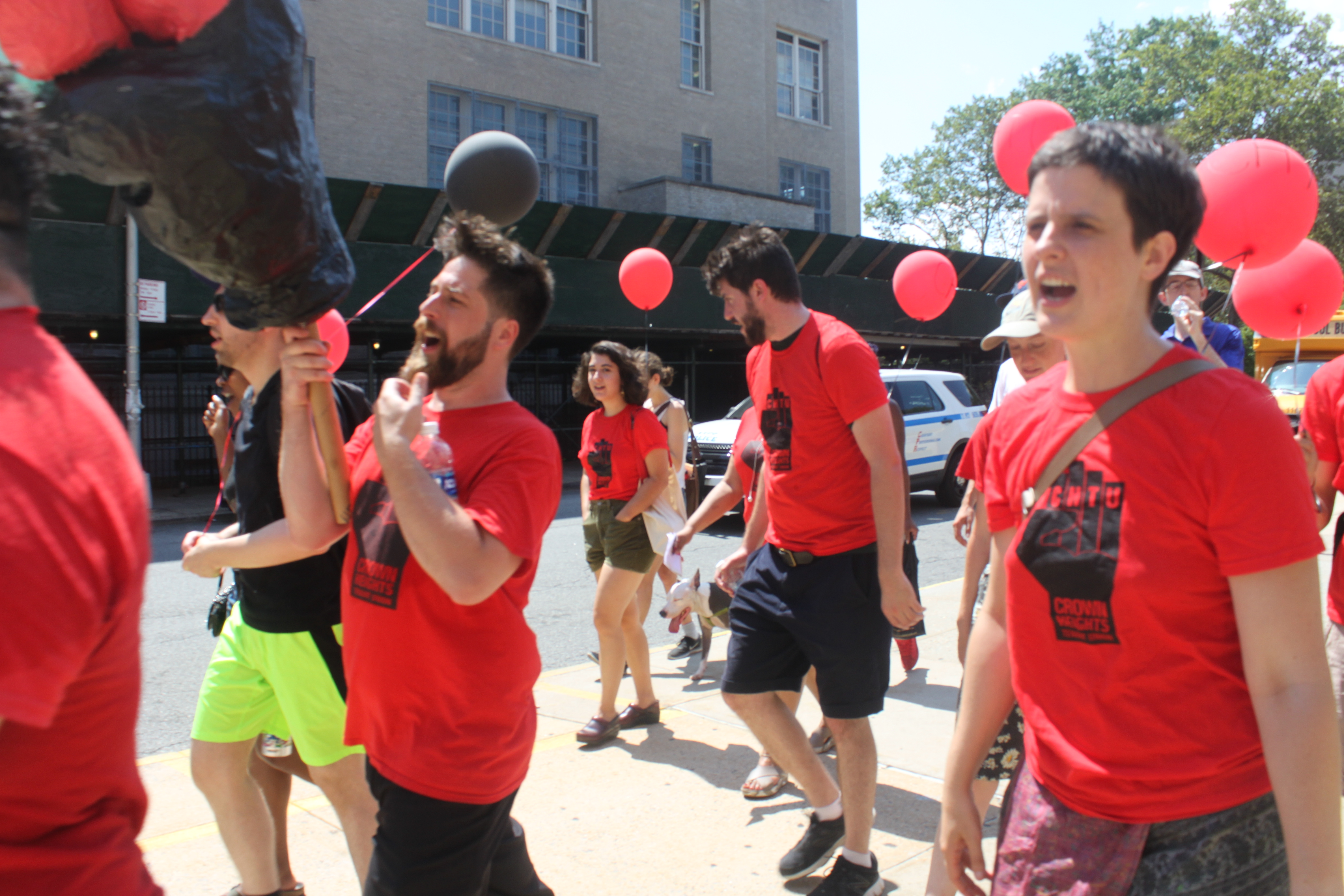 "I don't like to call them 'gentrifiers,' because they were displaced, too." Mossman added. Many who move to Crown Heights are fleeing higher rents in Manhattan and other parts of Brooklyn, and unwittingly pushing out long-standing residents in the process.

The CHTU encourages new tenants to join by letting them know they're often paying much higher rents than their neighbors—and that these higher rents are often illegal. "They're often younger and not aware of rent laws," White said during the march. "They feel like they're moving into an established community and they feel like outsiders, so we try to bring them in."

Protesters' final stop was 80 New York Avenue, a building where every single tenant—both transplants and longtime residents—was a member of the union. Lisa Mathis, a building resident, described the tactics Gold Management had used to drive out their longtime tenants. "They offered buyouts and never made the payments, they harassed families, they even had fake ICE agents come into the building," Mathis told the small crowd. "They took out the boiler in the winter and replaced it with individual heaters, but only for the new tenants." Thanks to the CHTU, the residents of 80 New York have a lawsuit against Gold, which will soon be seen by the New York State Supreme Court.

After the last stop, protesters walked to a community-organized picnic in Brower Park. On the way, they passed a block party, complete with grilling, dancing, and kids splashing around an opened fire hydrant.

"This is what it's all about," John Massey, a lifelong Crown Heights resident said. "If I get displaced and move to Kew Gardens, there won't be block parties like this."

Multiple requests for comment from both BCB and Gold Management were not returned.

#Crown Heights
#crown heights tenant union
#gentrification
#original
Do you know the scoop? Comment below or Send us a Tip