Photos: Construction On The Giant Hudson Yards 'Vessel' Has Begun

The first of 75 geodesic pieces that will make up the outer structure of 'Vessel,' a new hive-like public artwork/structure opening in 2018, was erected in Hudson Yards Tuesday morning. Construction workers, developer executives, and members of the press applauded as the single piece of steel was lifted by a crane and placed atop its foundation—the first step in an expedited build that will see Vessel top out before year's end.

In its finished "Who the hell let M.C. Escher design a spaceship" form, Vessel will stand like an inverted insectoid hive 15 stories high over West 30th Street in Hudson Yards' public square. Its inner wills will be lined with 154 interconnected flights of stairs and 80 landings. Like the nearby High Line, entrance to the structure will be completely free and open to the public. Also like the High Line, it's sure to become a swirling gyre of lost/tired/Instagramming tourists. 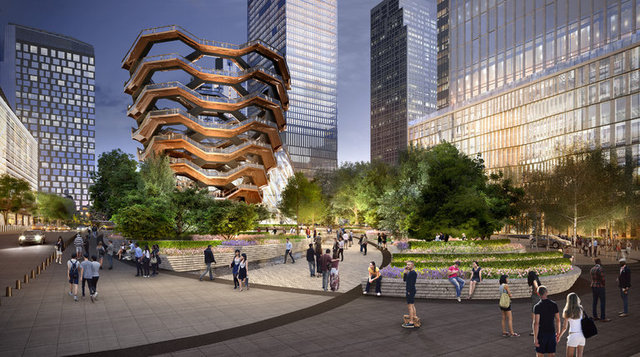 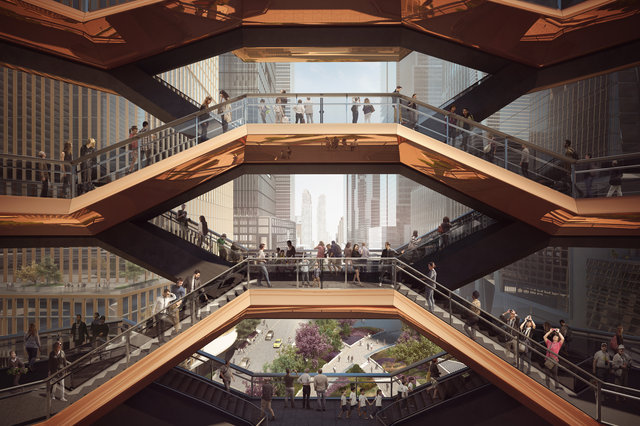 "When I was a student, I fell in love with an old discarded flight of wooden stairs outside a local building site. It caught my imagination and I loved that is was part furniture and part infrastructure. You could climb up stairs, jump on them, dance on them, get tired on them and then plonk yourself down on them," designer Thomas Heatherwick said in a statement last September when the Vessel design was unveiled. The installation will cost an estimated $200 million, all of which was privately financed by developers.

At the construction site Tuesday, Stephen Ross, Chairman of Related, the real estate company overseeing Vessel's construction, boasted the finished structure will "be to New York what the Eiffel Tower is to Paris. We wanted something different, something iconic, something that doesn't exist anywhere else." Ross also suggested that "Vessel" is only a temporary name, and that New Yorkers will collectively give the structure its own name. Leave your suggestions in the comments!