Just when you thought it was safe to bring out your pumpkins for Halloween season, this happens: according to reports, a car slammed into Corner Grocers on the Lower East Side after a brief car chase with cops this afternoon. The incident happened near Orchard and Rivington Streets, and according to Bowery Boogie, the driver “jumped out of the car running from the cops and it kept going.” We'd like to be able to say no pumpkins were injured in this accident...but as you can see here, that's obviously not true.

A witness sent us the above photo, and this account of the incident:

I heard a loud noise and looked out my window to see that the white car pictured here had turned the wrong way on Orchard St and run into the black car. A city marshall was in control of the situation, and I watched as an NYPD cruiser rolled by and left, and I lost interest when the tow truck arrived. A little while later, I peaked out my window again only to find that somehow the white car had now run into Corner Grocers... no idea what happened in the moments that I wasn't watching to have caused this.

Check out the tweets below about the accident—you can basically make a panorama of the scene by putting the various photos together.

#Thattime you work from home and a car chase in your block ends up with a crash into the #bodega you were in #nyc #les twitpic.com/b0q34o

Then the car rolled into my favorite #bodega #chaos on #orchard @jonathanvigliottiinstagr.am/p/QVCuY3v-ZI/

Oops. The TOW TRUCK guy drove into the bodega while trying to get the car on the truck after the FIRST accid instagr.am/p/QVDUzuJUMe/ 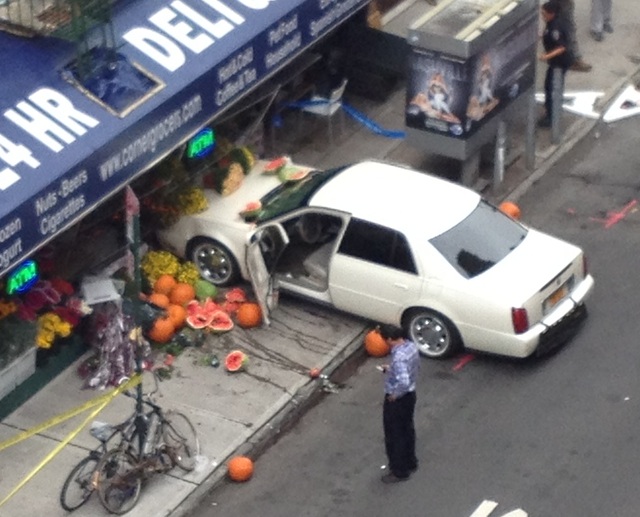 Update: Tipster Wes LeForce wrote us with an account of what happened, and a few more photos of the scene:

My coworker and I were eating lunch along the street at the Orchard House (delicious steak sandwiches) when this took place. The Marshall, in the navy car, t-boned the white Cadillac and slowly pushed it down the street until it stopped at the intersection of Rivington. Once the cars stopped this guy jumped out of the white Cadillac, grabbed some bags and stuff and started backing up. The marshall (in street clothes) got out, started yelling, and pulled out a nightstick. The marshall then started (really slowly) chasing this guy who wasn't really running, just keeping ahead of the marshall. A third guy got involved in the chase. Maybe the marhsall told him who he was, we dont know. From our perspective you couldnt tell he was any authority, we just thought it was a street fight. The three of them pass us going north up Orchard. Once they were out of site we walked down to the cars and thats when the cops showed up. After a bit a tow truck pulls up. The car was apparently still in drive when they (either the cops or the guy running the tow truck) started it up and it slammed into the side of the grocery. Dont know if they've caught him or not, but the point is the marshall - while giving what appeared to be a subpar chase - performed a perfectly executed pit maneuver. 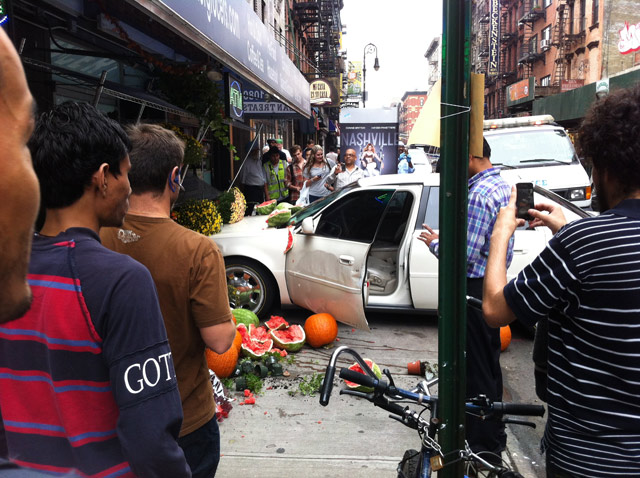 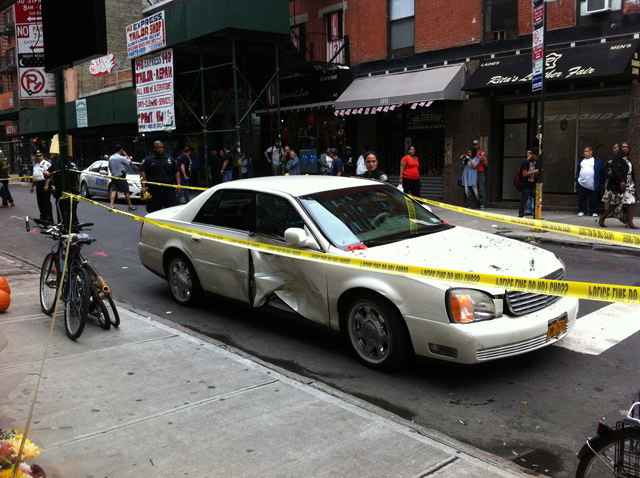 #accident
#car
#corner grocers
#Fruit Stand
#LES
#Lower East Side
#manhattan
#pumpkins
#original
Do you know the scoop? Comment below or Send us a Tip
A new Gothamist is coming! We’ve moved comments over to our beta site. Click here to join the conversation and get a preview of our new website.