A year ago, John Berryhill was taking notes in a LaGuardia Community College lecture hall when he learned that an 18-year-old unarmed black man named Michael Brown had been shot and killed by police in Ferguson, Missouri. Immediately, Berryhill's class emptied out and began to march towards the Brooklyn Bridge in protest.

Berryhill, 35, of Red Hook, recalled that moment vividly as he marched yesterday afternoon in a protest to commemorate Brown's death.

"The blatant police brutality I experience on a daily basis, I feel like I need to be out here supporting the people who are being killed," Berryhill told us.

Over a hundred protesters gathered outside the Barclays Center in Brooklyn on Sunday, unfurling banners and giving impassioned speeches called for changes to police culture and America's justice system. Just after 1 p.m., demonstrators laid down for a four minute moment of silence, eulogizing Brown, then quickly set off. The group amassed at Fort Greene Place, and later the Fulton Avenue mall, chanting "New York is Ferguson and Ferguson is New York!"

Although NYPD presence remained light throughout the Brooklyn protests, two demonstrators were isolated and arrested on Fulton after only fifteen minutes of marching.

Berryhill watched, admitting he knew the feeling. "Cops are always harassing me, telling me to do things that aren't necessary. It's constant," he said.

A police spokesperson could not confirm the total number of protesters arrested.

Demonstrators paused briefly in Downtown Brooklyn to regroup, and then boarded subway trains uptown, where they planned to meet another group gathered in Harlem. Packed into just two cars, shouts of "Whose train? Our train!" rang out from the group, and many passed pamphlets detailing Brown's death to tourists and other commuters.

"Excuse me, do you have a minute for black lives?" one of the march's leaders asked as a couple boarded from a platform at 14th street. 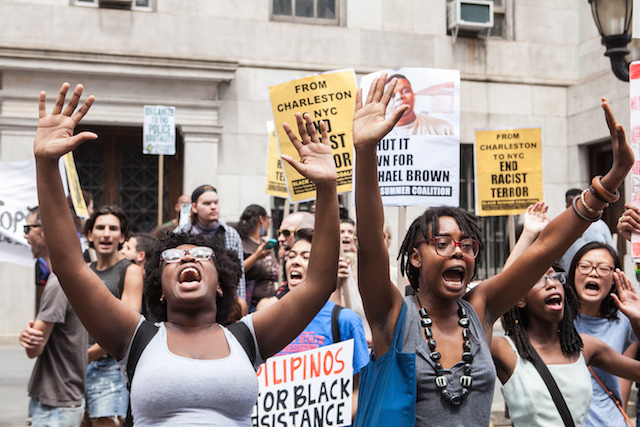 Gathered together in Harlem, the protest swelled to over two hundred people, including National Lawyers Guild worker Chris Hermes.

Another protester named Sadie Jordan said, "I'm tired of police brutality in my community, in every community. I have nephews and nieces that I'm worried about, that will get killed walking down the streets." 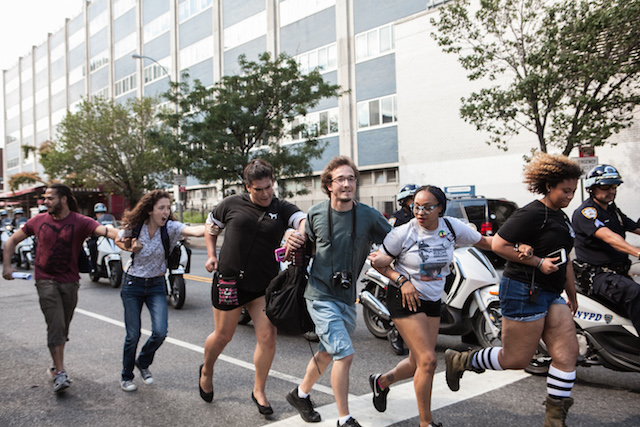 Just after 3 p.m., demonstrators left 125th street and made repeated attempts to take over lanes of traffic as they moved North through Harlem, but were blocked by columns of NYPD officers on motor scooters. The protest was eventually pushed to 135th Street, and then East on Madison Avenue, eventually crossing over into the Bronx.

Walking across the Madison Avenue Bridge was Harlem resident Monica Thompson and her five-year-old daughter, Zaire Weah. "Why are there police here?" the young girl asked her mother.

"Because they want to arrest us."

#black lives matter
#michael brown
#police brutality
#original
Do you know the scoop? Comment below or Send us a Tip