Around one hundred anti-Islam activists gathered for a "March Against Sharia Law" Saturday in Foley Square, where they were met by several larger counter-demonstrations led by the Council of American Islamic Relations, the Muslim-Jewish Anti-Fascist Front, and a host of other progressive organizations. A heavy police presence kept the two factions separate for most of the day, though a few small fights did break out in the margins of the park. Four arrests were made during the rally, all of them on the pro-Muslim side, and Oath Keeper Frank Morganthaler was removed in an ambulance after going into cardiac arrest. His condition is not yet known.

The rally, part of a nationwide "March Against Sharia" that took place in more than 20 cities Saturday, was organized by ACT for America, a Trump-aligned lobbyist organization and the largest anti-Muslim hate group in the country, according to the Southern Poverty Law Center. In recent weeks, the planned events have become flashpoints for free speech debates—most notably in Portland, Oregon where the mayor called on federal authorities to cancel the city's rally in the wake of two fatal stabbings carried out by a man yelling anti-Muslim slurs. ACT was also forced to release a statement disavowing the Arkansas march after it came to light that the event's lead organizer is an avowed white supremacist who'd previously advocated for the extermination of Muslims.

Likewise, New York's anti-Sharia demonstration featured a mix of self-identified human rights defenders and outright white nationalists ("If you're not a white Christian, don't talk to me," one woman, who declined to offer a name, told me). About a dozen walkie-talkie wearing Oath Keepers provided security for the attendees, who carried signs reading "Sharia is hate" and "No more Muslims." The group also included such alt-right luminaries as Gavin McInnes, the leader of the Proud Boys, and Lauren Southern, a Canadian media personality who recently attempted to block a boat of refugees from entering Italy. At one point, a counter-demonstrator sprayed Southern with an unidentified liquid, allegedly urine. He was later arrested and charged with unlawful possession of a noxious matter, according to an NYPD spokesperson.

Here's the moment #antifa threw pee at Lauren Southern as I was trying to interview her pic.twitter.com/uL03SwY7Oa

Such confrontations were the exception during the heavily barricaded event, with most of the hostility confined to taunting and chanting exchanged from opposite sides of Centre Street. "We will not yield to the Marxist left," said Pax Hart, who helped organize the rally, over a cacophony of cowbells and air horns intended to drown out the speeches. "We don't have to apologize for standing up to the Islamofascist movement." 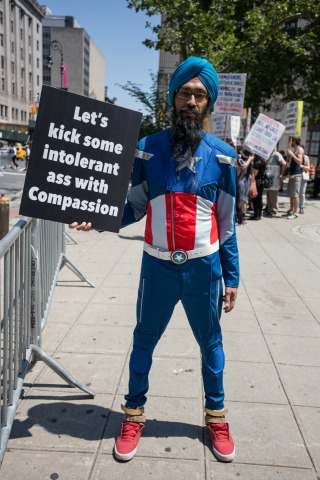 "This is the internet in real life, everyone giving you a thumbs up or thumbs down, but now we get to look you in the face, and all you know how to do is make f*cking noise," shouted Paul Bazile, a production designer for Proud Boys magazine, in the direction of the counter-protesters. He noted that some would-be supporters had expressed fear of a terrorist attack on the site, but added, "I'm standing here with Proud Boys, Oath Keepers, Red Elephants, and the NYPD. I've never felt safer in my life."

On the pro-Muslim side of the street, many of those in attendance were jubilant over their relative crowd size. "It's incredible, suddenly we have Jews, Muslims, LGBTQ, Asians, women, brown people, black people who all kind of feel targeted, so we said let's go out and confront intolerance with creative courage," Vishavjit Singh, otherwise known as Sikh Captain America, told Gothamist. "I've lived stereotypes as a turban and beard person all my life, but I use that as inspiration to build bridges."

Just after 2 p.m., only a handful of anti-Sharia ralliers remained, as the counter-protesters, still at least one hundred strong, began marching south. At City Hall Park, some activists paid tribute to those who'd been killed in Portland, while others formed a circle to discuss future actions.

"It was really great to see multiple left groups come together and share the space to unify around this message," said Eman Abdelhadi, the cofounder of the Muslim Jewish Anti-Fascist Front. "The free speech argument is a strawman when you're inciting violence, and we have just as much of a right to show up and tell them that they're wrong."

#anti islam
#anti sharia
#CAIR
#foley square
#MuJEW
#original
Do you know the scoop? Comment below or Send us a Tip