An estimated one thousand people marched from the United Nations through the Upper East Side yesterday to demand a Robin Hood Tax and protest the growing inequality gap.

At least a dozen protesters were arrested as the march blocked traffic. An NYPD spokesman said the department did not have a specific number of arrests, but one of the detainees was New York State Senator Brad Hoylman, per this Getty photo. 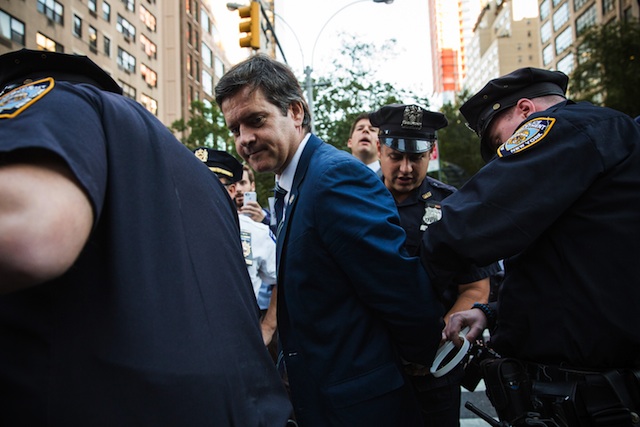 The rally point was Dag Hammarskjold Plaza, and there probably 500+ people there, listening to speeches and having animated discussions. The march proceeded out onto 2nd Avenue and 46th Street, and the first group out of the gate abruptly stopped in the crosswalk, holding an "End AIDS With Robin Hood Tax" banner across the entire avenue, blocking traffic for many blocks uptown.

Needless to say, the NYPD was not amused, and, after reading the riot act, arrested every one of them. Maybe 15 or 18 people total? It was hard to keep count, because the officers kept shooing me away. It was all very non-confrontational—these arrestees were clearly old ACT UP pros—and the NYPD may have been forewarned.

The march then proceeded toward JP Morgan Chase on Park, sometimes spilling into the street, but mostly keeping within reasonable distance of the sidewalk. Again, the NYPD were firm, but this wasn't a "Fuck you, pig" sort of crowd, so things went pretty smoothly.

The Robin Hood Tax is a financial transaction tax that would charge 50 cents (or half a percent) of every $100 worth of financial transactions. Such a tax would generate $350 billion a year in revenue for social services and act as a check on some of the reckless behavior that even the biggest, most "responsible" banks can't seem to shake. A long list of prominent and important thinkers support the idea, which never really seems to mean much by itself, hence the march.

Back down in Zuccotti, the NYPD continued to make arrests for no discernable reason. This man is detained because he is standing on the sidewalk:

#income inequality
#occupy wall street
#robin hood tax
#s17
#original
Do you know the scoop? Comment below or Send us a Tip