After a two year absence from the stage, Grizzly Bear came out of hiding to warm up over 28,000 people in Prospect Park Sunday—and not even a crackling keyboard could stop them. Frontman Ed Droste acknowledged the technical difficulties, only to assure the crowd "That doesn't matter, because we're all here for one person and that's Bernie Sanders."

The Democratic Presidential hopeful delivered his by-now familiar stump speech to the sprawling crowd, which—according to the Sanders campaign—eclipsed last week's massive rally in Washington Square park. Actor Danny DeVito had the task of introducing Sanders, who he praised as being "Beholden to no one except the people." 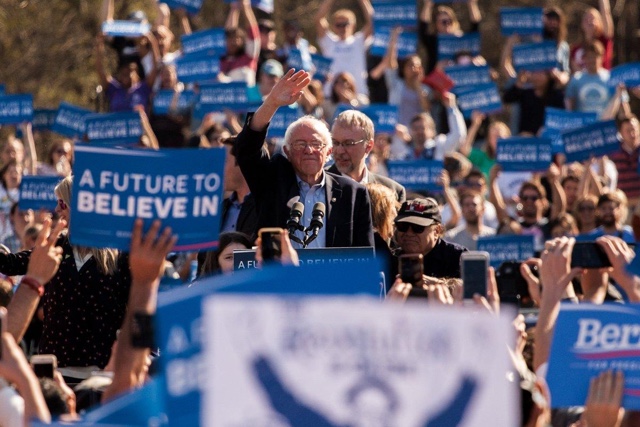 In a 50-minute speech that stuck to his now-familiar talking points (hammering against "too big to fail" Wall Street, demanding free higher education and universal single-payer healthcare, and decrying America's overcrowded prisons), the Brooklyn native assured supporters that he intends to defeat opponent Hillary Clinton in Tuesday's statewide primary.

"This is a campaign that is on the move. With your help on Tuesday we’re going to win right here in New York," he said. "This is a campaign that is bringing millions of people into the political process. Working people and young people who are sick and tired of establishment politics and establishment economics. We want a government which represents all of us, not just the 1 percent." Here's Sanders's full speech:

City Council Member Jumaane Williams also announced his endorsement of Sanders's campaign Sunday, and jabbed at those who criticized him as being "at war with reality."

"I thought to myself, you're goddamn right. If you're not at war with reality, you're not focused enough," Williams said. "Sometimes it's okay to shoot for the political revolutionary moonshot!"

"There were 28,300 people who came out to Brooklyn yesterday, not for a rock concert, but because they care about the future of this country," Rep. Tulsi Gabbard of Hawaii told CNN. "And they care about taking action to make things better, to be able to put some of these strong changes forward."

As in past rallies, Sanders exited to the sounds of David Bowie's "Starman," and attendees slowly made their way out of the park, hopeful for his primary chances. "The biggest issue for me is campaign finance reform. He's the only one who isn't corrupt and doesn't take the money," Taylor Kilduff of Woodbridge, New Jersey said. "Hillary takes money from Wall Street and corporations, and he doesn't."

Park Slope resident Jen Clarke said Sanders's hard-line stances on environmental preservation and prison reform are what brought her to Sunday's rally. "He's unequivocal in his denouncement of fracking, and as a black person, we imprison more people than any other country in the world," Clarke said. "I'm voting for someone I believe in, and I do like that he's been on the right side of history."

Clarke added that she would not vote for Hillary Clinton, should she claim the Democratic nomination: "If that happens, I'll write in Bernie or Liz Warren. Fuck yeah."

Today, Sanders will have a rally in Hunter's Point South Park (RSVP), doors open at 5 p.m. and the program—which includes Danny Glover, Fisher Stevens and TV on Radio—starts at 7 p.m.

#bernie sanders
#Grizzly Bear
#prospect park
#original
Do you know the scoop? Comment below or Send us a Tip