Sanders remains the underdog in the NY race, trailing Hillary Clinton by ten points in the most optimistic of recent polls, but the candidate and his fans were anything but discouraged. "I think we've got a surprise for the establishment [on Tuesday]," Sanders said to rolling cheers at the end of his nearly hour-long speech, and then, after getting a smooch from his wife Jane, he waded into the front rows of the crowd like a rock star. 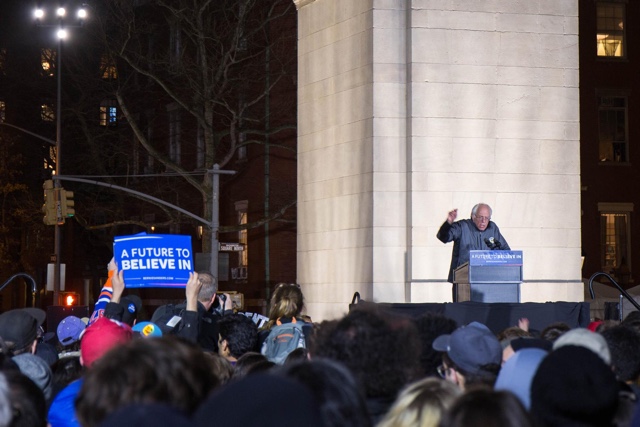 The entire night's program lasted nearly three hours (though most in attendance had been waiting on line outside the park for far longer than that), with a four-song set by Vampire Weekend kicking things off, followed by hype speeches from Rosario Dawson, Spike Lee, Tim Robbins, CWA and TWU union leaders, Linda Sarsour, and Nina Turner. Here's video of the event; at around 55 minutes, Lee introduces Sanders:

Sanders hit all the expected points in a feisty speech, occasionally slamming his rival Clinton on her voting record, but mostly attacking familiar targets: Wall Street greed and Republicans, Citizens United and Super PACs, wage inequality and offshore tax havens, drug laws and mass incarceration, and the "awful trade agreements" that have led to the loss of millions of jobs in America.

Sanders also vowed to remove marijuana from the Section 1 federal drug list when he became president. He promised to end wage inequality between men and women. He pledged to "substantially lower student debt" and to offer free public college educations to anyone willing to do the work. These latter initiatives, Sanders said, would be paid for by a "speculation tax on Wall Street."

The Brooklyn native also reminded the crowd, "If we have a large voter turnout on Tuesday, we’re going to win this thing."

Tonight, Sanders will face off against Clinton in a debate at the Brooklyn Navy Yard at 9 p.m. CNN is broadcasting the showdown live, and you can also can stream it online at CNN.com.

#bernie sanders
#election 2016
#feel the bern
#washington square park
#original
Do you know the scoop? Comment below or Send us a Tip