Twelve people were arrested and charged with disorderly conduct after obstructing the NYC LGBT Pride March outside the Stonewall Inn, police said on Sunday.

Marching behind a sign that read "No Cops, No Banks," the demonstrators appeared to be protesting the increasing corporatization and police involvement with the annual event. 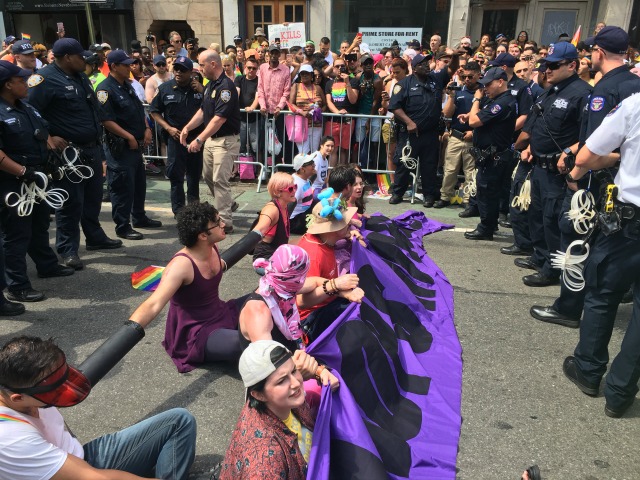 According to Gothamist photographer Scott Lynch, the demonstration was resolved calmly, with police giving the protestors space for 10 minutes before making arrests. The crowd was "mostly irritated by the delay, and heartily cheered the police band that followed," according to Lynch.

Here’s police making an arrest at NYC Pride. The protesters blocked the parade and were chanting about NYPD.

Earlier in the day, some in attendance had complained that the NYPD's support for the parade failed to absolve recent anti-gay police actions—a lawsuit, for example, alleges that an NYPD cop beat a gay man while yelling homophobic slurs at him during the 2014 Pride Parade.

In 2016, then-Police Commissioner Bill Bratton said that the NYPD didn't need to apologize to the LGBTQ community for police brutality during the 1969 Stonewall uprising: "There is no denying that out of that terrible experience came so much good. It was the tipping point, if you will. So I think we should all celebrate that out of that terrible experience, a lot of good came... I don't think [an apology is] necessary. The apology is all that's occurred since then."

So far, no other arrests have been made at the Pride March today.

Update: It appears the protesters are affiliated with No Justice No Peace, which calls itself a "Local coalition of queer and trans folks working to end the LGBT movement's complicity with systems that oppress" in its Twitter bio.

#nypd
#pride
#pride march
#original
Do you know the scoop? Comment below or Send us a Tip