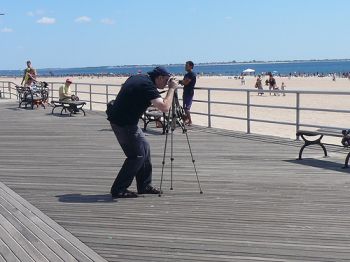 The war between photographers and police wages on, with the latest battleground being Coney Island. The Village Voice reports that Simon Lund, a Manhattan commercial photographer with a habit of hitting Coney 10 to 20 times each summer for personal photographic expeditions, was busted by the NYPD. The thing is, he didn't do anything illegal.

The paper talked to Todd Maisel, vice president of the New York Press Photographers Association and a Daily News photographer, who said "news photogs get into occasional scrapes with police, but most know never to give up their film."

In Lund's case, he was bullied by beach-goers as well! The Voice recounts his saga from Memorial Day when he was out with his wife and a woman accused him of clicking away at her son -- something he was unaware of, but is legal in any case. She had him accompany her to find an officer, and eventually the incident escalated when her family members joined in and shouted at the police until they made him turn over the film. Reportedly one officer told Lund, "You should destroy your film right now, or give it to her. You've got to give up your film, or things are going to get much worse for you." The NYPD declined comment.

Last year a Columbia Grad student was harassed by the cops while working on a subway photography project, something he is suing the NYPD for. The NYCLU has also filed several lawsuits against the NYPD for violating First Amendment rights; their suit also alleges that their Intelligence Division maintains a database of everyone "investigated for photography . . . regardless of the outcome of the investigation."

As for Lund, he plans to file a complaint with the Civilian Complaint Review Board.

#coney island
#laws
#nyclu
#nypd
#photography
#Simon Lund
Do you know the scoop? Comment below or Send us a Tip