Photo: What's Up With This Goat Head Found In Prospect Park?

It's been almost four years since a goat head was last found in Prospect Park (that we're aware of), so we were certainly about due for another, assuming Goat Head Scattering is a quadrennial event like a total solar eclipse or the World Cup. Here's another angle: 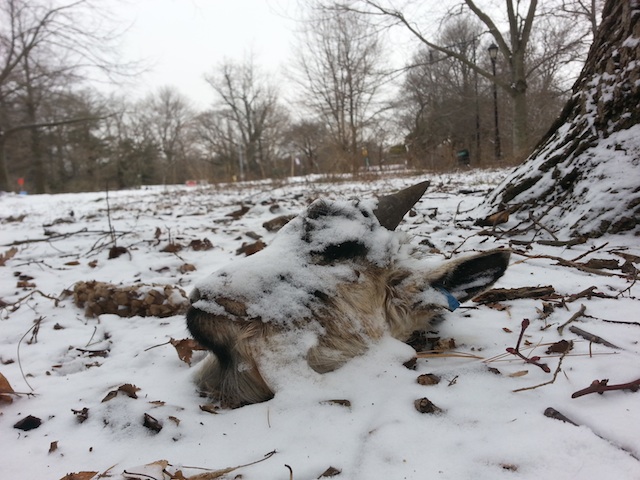 Today's head was found by the park's Lincoln Road entrance this morning, adorned with ear tags suggesting that it—along with a body, presumably?—came from a live animal market or slaughterhouse, and is not an escaped house pet or someone's ironic lawnmower.

Decapitated goats have popped up in various locations over the years, and are generally assumed to be part of Santeria rituals—animal sacrifice often commemorates "life events" like birth, marriage and death. While it is constitutional for practitioners of Santeria to sacrifice animals, the law requires remains be properly discarded, which does not mean flinging them on the ground for discovery by area children chasing soccer balls or couples posing for wedding photos.

Now about that ear tag—the number "93" has significance in the law of Thelema, which boils down to "Do what thou wilt." In that case, the connection is clear—someone decided that they wilt throw their goat head on the ground like it's an apple core instead of placing it in the trash.

Alternatively, maybe an anonymous do-gooder has just planted a beautiful goat tree, and it's finally starting to sprout. Can't wait 'til spring!

#goat head
#prospect park
#santeria
#original
Do you know the scoop? Comment below or Send us a Tip