Photo: Turns Out You CAN Strip A Citi Bike

It was just a matter of time before someone interpreted Citi Bike's innate durability and the low resale value of its parts as a challenge. Scarcely one week after streetwise bike mechanic Hal Ruzal touted Citi Bike as being all but un-fuckwithable, tipster Michael Day sent us this photo of a Citi Bike that has most definitely been fucked with. 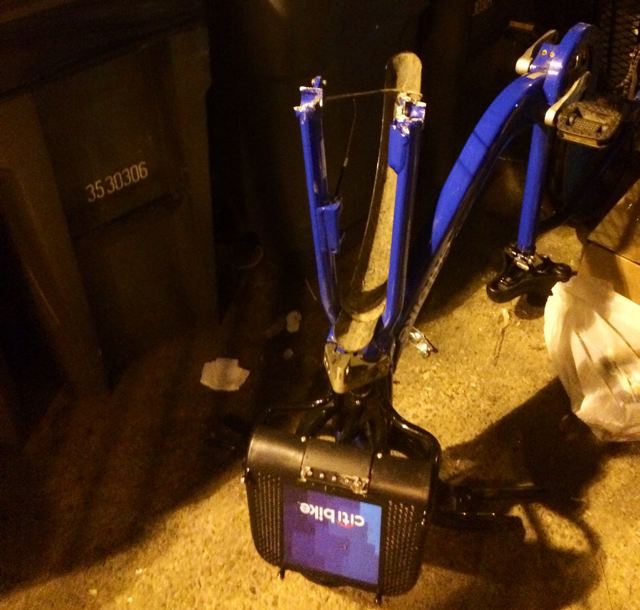 The above bike, whose ravaged carcass was left abandoned outside an East Harlem apartment, has been relieved of its tires and some elements of its handlebars, which makes no sense—the tires are not only huge, they're inflated with nitrogen and are not at all a feasible substitute for standard bike tires. What else do you do with a large bike tire, besides fashion it into a chintzy end table or heave it at your tween rival's head?

Whatever the reason, it's apparent someone really wanted those wheels.The culprit's removal strategy was apparently to tear the tires straight from the frame, or perhaps enlist some PCP-addled zombie to chew them off. Who would do this? Has anyone seen Solange since she left the Standard last week, by the way?