Photographs taken by NYC Park Advocates show that the tree that killed a pregnant woman sitting on a Queens park bench was "hollowed out" and "dead." Some park goers are incensed, saying they complained about trees in Kissena Park for years, "It was something that was an accident waiting to happen."

Yingyi Li-Dikov, 30, was six months pregnant when the tree struck her. Her husband, Aleksandar Dikov, 20, said they were expecting a baby girl and that his wife loved Kissena Park. He was upset yesterday, "I kind of wish I was there. Maybe I could have prevented it. Maybe this wouldn’t have happened, or if it did, it would happen to both of us.” Dikov laid flowers down at the bench where his wife was killed.

The Parks Department issued a press release saying, "This oak tree, approximately 70-years old and 50-feet tall, snapped about eight feet from the ground. The tree is being thoroughly examined to determine more about its condition. But Parks department employees in the park told NYC Parks Advocates, "The tree was hollowed out. It was dead." 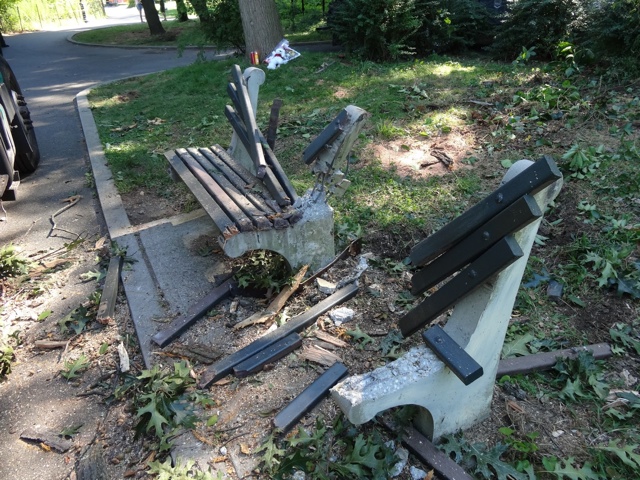 State Senator Tony Avella railed, "How can the mayor want to plant a million trees if the City cannot even take care of the trees is already has... I have been saying for a while now that people's lives are in danger as a result of the current City tree policy." 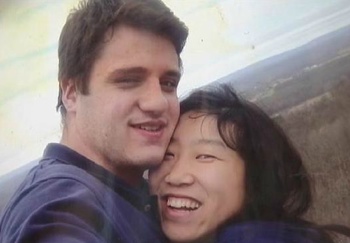 Geoffrey Croft of NYC Parks Advocates took issue with how the Parks Department was handling the incident, "The Parks Department refused to provide the media with the number of tree inspectors for the more than 2.6 million trees they are legally charged with caring for, or provide the number of dedicated personnel to maintain them. Instead, the agency dumped out a statement at 5:00pm meant in part to deceive the media and the public into thinking the trees near the incident were inspected when they were clearly not. The carefully worded statement said the area had 'six zone inspections,' without specifically mentioning that each tree or any tree had been inspected."

Dikov and his wife met four years ago at a gym. The NY Times reports, "He eventually enlisted in the Army National Guard. She moved to San Antonio to be with him during basic training, where she cooked him meals every night." They got married last year, "After the couple found out Ms. Li-Dikov was pregnant, they began stockpiling baby clothes and dreaming up baby names. They had not settled on a name: he liked Christina, a traditional name that satisfied his Bulgarian parents. She suggested naming their daughter after the Chinese word for moonlight."

An EMT, George Viriya, who happened to be in the park, told the Daily News, "We climbed over the tree and realized there was a body underneath. Her arms were at weird-angled positions... Please tell her husband that she fought hard, she fought as long as she could."