Photo: This Couch Was Put On The Subway Out Of Desperation

After seeing a photo of a man comfortably lounging on a chair in the middle of a subway car yesterday, another post popped up on Reddit one-upping it by showing a couch on the G train. And as the owner of the couch Ty told us, she and her friend brought it onto the subway on Saturday out of desperation, and with the help of a lot of kindly strangers.

"I had been sleeping on an air mattress in my Bed Stuy apartment for two months (couldn't afford a bed, too much of a crippling fear of bed bugs to get a used bed), and my friend and I went to a prop shop in Gowanus in the hopes that I could find something to sleep on," Ty told us. As luck would have it, the prop shop, Film Biz Recycling, were having a 50% off sale, which is how they came upon this couch (which employees had "affectionately named Carl the Comfy Couch...probably because it's a miraculously ugly couch and needed some talking up") selling for $30.

"So we bought it. And then realized... how the fuck are we going to get back to Bed Stuy?" she said. "So we wheel it down 4th Avenue to the G train. We had to get it through the emergency door, and then carry it up two flights of stairs. Which was brutal. But a lot of really great random people helped us get it up. Then we waited on the G platform (it was a Saturday afternoon and the train was super empty...thank goodness)." 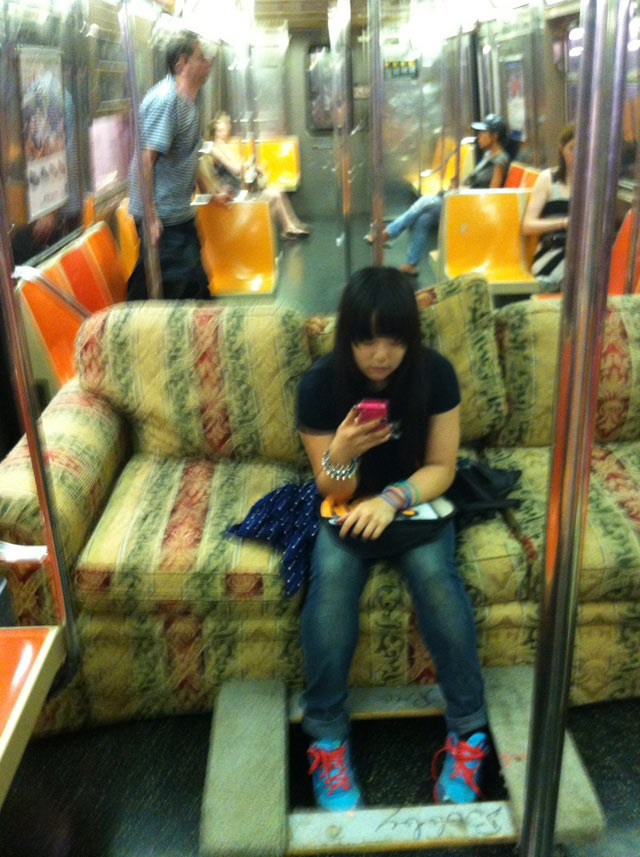 And while people generally don't react with joy at the sight of giant furniture being carried on the subway, Ty said the couch piqued the interest of other straphangers in a good way:

We were sitting on the train on the couch and everyone was giggling and taking pictures. We felt kinda awkward, but then we realized this is one of the first times that the G Train had been fun. People were genuinely intrigued and every person on the car seemed more amused than mad, and kept asking us "WHY?!" (I couldn't afford a van to carry it, and it was a spur of the moment thing).

When they got to their destination at the Bedford-Nostrand stop, "pretty much everyone on the train helped us get it up to the surface, and then we just had to wheel it 6 blocks. I was really happy that so many people were helping us!" Subway Etiquette: it's not just about shaming people on the internet.