Photo Shows Snow Parking Honeymoon OVER (In Some Places)

It was "fun" while it lasted, but leaving your car anywhere and blaming it on the weather is no longer cutting it with the NYPD, at least in some neighborhoods. Brooklyn resident Elana Novofastovsky sent us this photo showing a traffic cop ticketing a car for double parking last night on Avenue Y and East 19th Street in Brooklyn. That's not her car, but she took the photo because she was amazed that the NYPD would ticket the car when "there is at lest 3 feet of snow on the ground from the curb and there is CLEARLY nowhere else to park." Novofastovsky was so shocked, in fact, that she pulled over and took this photo of the ticket after the cop drove off.

Meanwhile, over in Gerritsen Beach, it's still the Wild Wild West, and despite some recent threats, intrepid blogger Daniel Cavanagh is there to document it. A reader sent him this photo of an SUV that's been left in the middle of the street for three days, preventing snow plows from clearing the three feet of snow blocking the road. 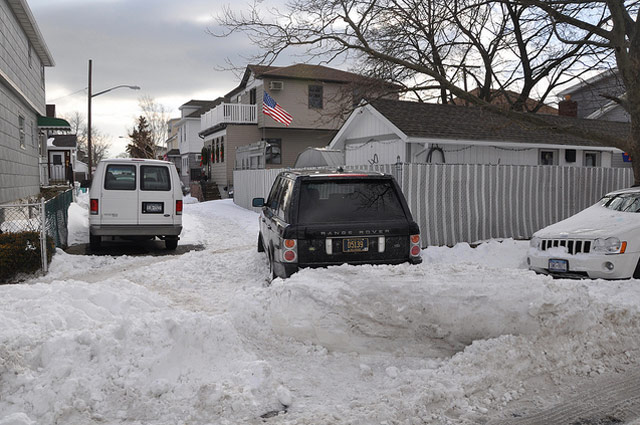 One outraged commenter seems to speak for the neighborhood: "He needs his ass beat, or the car removed piece by piece. He has told some people that it won’t start, told some people that he lost the key… I don’t care what the excuse is but it has got to go. I reported it to 311 twice now. A man had to CARRY his sick son to the doctor because there was no other way out of here."