A large banner criticizing President Trump's policies was just hung from the Manhattan Bridge early Monday morning. The banner hangs over DUMBO on the Brooklyn side and reads: "Build Bridges, Not Walls," and also includes "#NoBanNoWall." By 8:30 a.m. the wind had blown it up.

UPDATE: Just after 9 a.m. some Dept. of Transportation workers came by and started to take the sign down, but departed before the job was done. Soon after, two NYPD officers came by, struggled with the banner for a bit, and about ten minutes later got it down and folded it up.

Yesterday, thousands of people rallied and marched in Manhattan to protest Trump's executive order to ban foreigners from seven Muslim majority nations. Hundreds of lawyers have been working at JFK Airport to help free detained travelers.

Power to the people who put this banner on the manhattan bridge last night! #buildbridgesnotwalls #nobannowall pic.twitter.com/aVDjN1QjBt 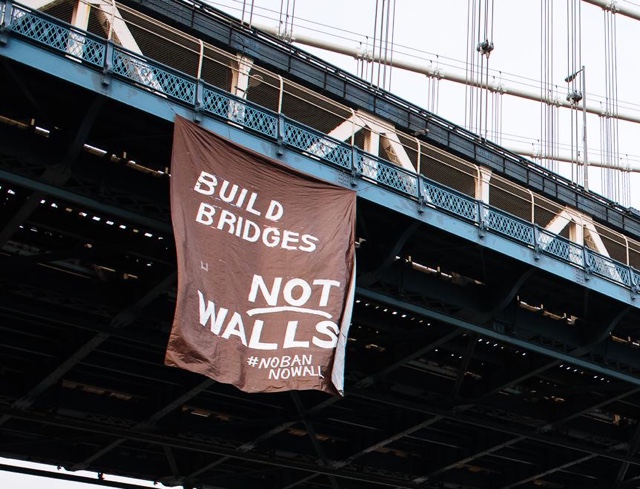 During the still-innocent days of October, a banner of Russian leader Vladmir Putin, with the word "Peacemaker," was put on the Manhattan Bridge.

##nobannowall
#immigration ban
#manhattan bridge
#muslim ban
#president trump
Do you know the scoop? Comment below or Send us a Tip