If you can tear yourself away from these awwwdowable photographs, here's the story about this dog and her nine puppies: Yesterday morning in Toms River, NJ police say that woman and her two children saw the dog and two very small puppies walking "dangerously close" to a road—which then set off waves of rescue efforts.

First, the family was able to retrieve the two puppies from Hooper Avenue, but the dog ran back into the woods. Toms River Animal Control Officers took the puppies, and then the animal control officers and a police officer started to search for the dog. According to the police, "They located a makeshift den that was dug into the dirt under some pine tree branches approximately fifty feet from the sidewalk adjacent to Hooper Avenue. Inside of the den were seven additional puppies that were rescued. The mother could not be located and a humane trapping device was set near the den. Five hours later the mother was also rescued after she entered the trap." 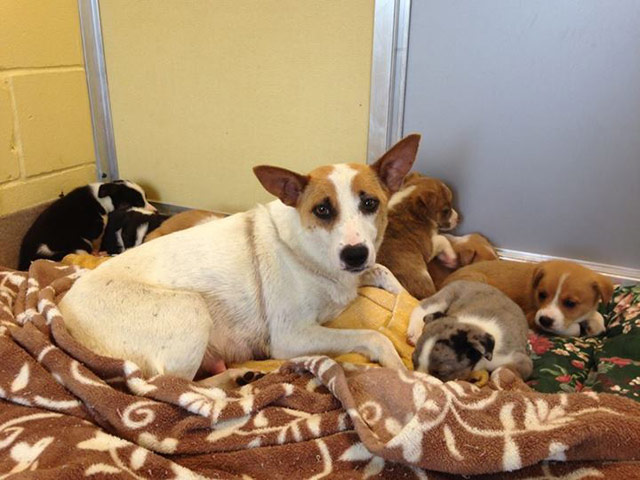 The puppies look to be about five weeks old and they and the mama dog are in generally good health. They are at the Toms River Animal Shelter, where they will stay while authorities look for an owner. The shelter's director Jim Bowen said, "If no one claims them they will be placed up for adoption after a minimum wait of approximately three weeks. The mother appears to be a Jack Russell Terrier and the puppies... are of an unknown mix."

#cute
#dog
#nj
#toms river
Do you know the scoop? Comment below or Send us a Tip