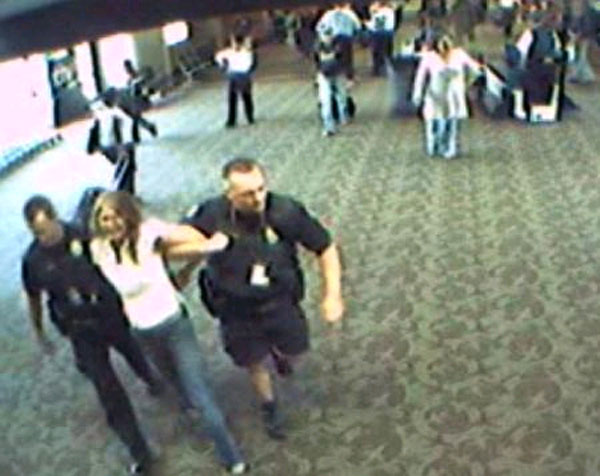 The Phoenix police released surveillance video showing the arrest of Carol Anne Gotbaum, a New Yorker who later died in police custody at Phoenix's Sky Harbor airport. Gotbaum had been upset about missing a connection to Tucson, where she was planning on entering alcohol rehabilitation, and became very upset at the gate. In the video, airline personnel are seen trying to talk to Gotbaum (wearing a white shirt at the top of the screen) who seems to be yelling (there is no sound) and keeps backing away, until the police arrive. Here's the video of the arrest, plus a description from the Arizona Republic:

Police Officers Andrew Woyna, Duane Rigg and Dick Richards approached Gotbaum and asked her to calm down, the video shows. When she continued to yell, one of the officers moved to arrest her...

...Gotbaum went limp when the officer grabbed her, and police fell to the floor along with her. One of Gotbaum's arms became pinned under her body, forcing police to roll her slightly in order to take her into custody.

She was not wearing shoes at the time of the arrest, and her purse was left in the gate area. Only birth-control pills and Motrin were found in her purse.

Gotbaum continued resisting arrest as police attempted to move her to a holding room, according to footage from three airport security cameras. At some points, she locked her legs so that police had to pull her forward. The three video angles shown by police Thursday didn't have sound. But witness accounts state that Gotbaum repeatedly shouted "I'm not a terrorist!" and said she "hated . . . the (expletive) American cops."

Here's another video with additional angles. After being escorted through the airport, Gotbaum was put in a holding cell, handcuffed to a bench, and later died after apparently strangling herself with the chain, in a possible attempt to escape. She was not supervised, but the police say they checked on her every 15 minutes and that she died during one 5-10 minute interval. The police also say they performed CPR on her.

While this was happening, Gotbaum's husband Noah called the airport's switchboard multiple timse. He had spoken to his upset wife earlier and told an operator during one of the calls, "She is, uh, uh, alcohol abusive ... but she is also in [a] deep depression and ... the police have to understand that they're not dealing with ... some lout who's just drank too much on an airplane. That's not what's going on here. This woman is suicidal. And they need to ... deal with very kid gloves. They don't know what they're dealing with." The operator told him, "Unfortunately, [the police are] still doing the investigation . . . so where can I have them give you a call? It's unfortunate we're going to have to wait until they give you a call."

Noah Gotbaum called the airport switchboard many times, and it's unclear when exactly the later calls took place (and whether they were after his wife was dead), but during one, he said, "I suggest someone give me a call immediately!" At one point he said the police are "playing with real fire right now." The police spokesman Sergeant Andy Hill said, "The officers had no knowledge of any of Ms. Gotbaum's personal issues. They had not been apprised of any calls from the family to the airport seeking to locate Ms. Gotbaum."

The lawyer for the Gotbaum family, Michael Manning, said that an airline employee saw Carol Gotbaum being taken to the detention area "listless, unconscious to nearly unconscious." According to the NY Times, Manning is withholding the name of the witness, "but planned to eventually release to the police. Once the employee is ready to be identified, Mr. Manning said, 'I want Phoenix police to interview this witness. This is important."

The NY Times reported yesterday that Gotbaum was originally planning on taking a direct flight to Tucson but took the later flight with the connection in Phoenix because she wanted to say goodbye to her three children. The Gotbaums released a statement after claiming Carol Gotbaum's body:

"Noah Gotbaum, Carol Anne's husband, is in Phoenix today to accompany his wife's body back to New York City. The memorial service will be held Sunday in New York and the family will sit shiva in the days following. The family has asked that the media respect their privacy during this time of mourning and allow them to grieve in peace through this weekend. The family's attorneys and other representatives will honor this request, as well, and will give no media statements or interviews after today. The family hopes you understand."

The Post has a PDF of the police report. In the next few weeks, more extensive results from autopsies by the medical examiner as well as a private pathologist hired by the family are expected.

#alcohol
#arizona
#Arizona Republic
#Carol Anne Gotbaum
#new yorker
#News: NYC
#phoenix
#police
#police officers
#terrorist
#The Phoenix
#The Police
#video
Do you know the scoop? Comment below or Send us a Tip
A new Gothamist is coming! We’ve moved comments over to our beta site. Click here to join the conversation and get a preview of our new website.