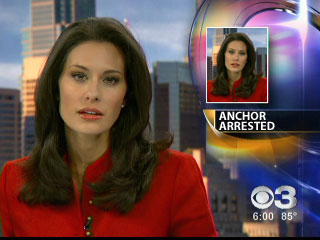 Alycia Lane, the anchorwoman from the CBS owned station KYW in Philadelphia , who was at one time linked to WCBS anchor Chris Wragge, sent bikini photos to a married man, and is frequently mentioned in the Post’s Page Six column got into some more hot water in Chelsea around 2 a..m. Sunday morning. The Long Island native, allegedly punched a female police officer from the 10th Precinct in the face at W. 17th Street and 9th Avenue.

According to a front page story the Post, Lane was traveling in a taxi with her current boyfriend, Philadelphia radio DJ and former WPIX entertainment reporter Chris Booker, when one of the passengers got out of the cab and confronted three officers in a slowly moving unmarked police vehicle. The officers got out of their vehicle and identified themselves as Lane was taking photos. Before she hit the officer she was told by a female officer to step back and allegedly told the officer, "I don't care that you're a cop - dyke bitch!"

A NYPD source told the Daily News, "She was in a cab, and the cab was behind an unmarked [police] car that was traveling slowly." And that, "She knew she was a cop."

The officer was treated and released from a hospital for a facial cut while Lane pleaded not guilty to the felony charge of assaulting a police officer, was released and faces a hearing on April 3. Lane’s lawyer David Smith told the Post, "She was accosted by several individuals wearing plainclothes who violently grabbed her camera to prevent her from taking pictures of the altercation they were involved in." He told the Daily News, "She absolutely didn't hit or make derogatory remarks to anyone. She was inside the taxi when the initial confrontation was going on."

Joanne Calabria, Vice President of Public Affairs for CBS Television Stations and spokesperson for KYW-TV told the AP that they were concerned about Lane and that, "We are still trying to sort out exactly what happened."