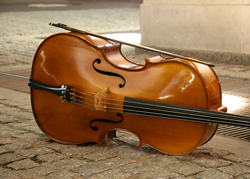 There's a nice story this weekend about a woman who spent 31 years as a cellist with the New York Philharmonic. She will leave the country's oldest orchestra after a September 14th performance, but one could hardly say she is retiring. Nancy Donaruma split her time the last few years between the Philharmonic and classes at an upstate college so she could become a full-time paramedic. She will be working near her home in Poughkeepsie, about 70 miles north of New York City.

Donaruma feels that her lifelong training as a musician will complement her more recent training as a paramedic. An attention to detail, emphasis on avoiding mistakes, manual dexterity, and an ability to work in concert with others are as valuable when treating a patient as they are on stage in front of a large audience. Her training as a paramedic was occasionally useful while performing as well. She's used her newly acquired skills to treat a string player who fainted and another musician who fell while walking off a stage.

The career change involves a significant pay cut, but Donaruma feels it's worth it. She'll continue to play her cello in chamber groups and in solo recitals, as well as for her new co-workers at Alamo EMS.

Also:The New York Times looks at the New York Philharmonic's decision to choose a relatively young conductor as its new music director, who is a native New Yorker and has family ties to the organization.